Maryland Crab Cakes at the Roadhouse 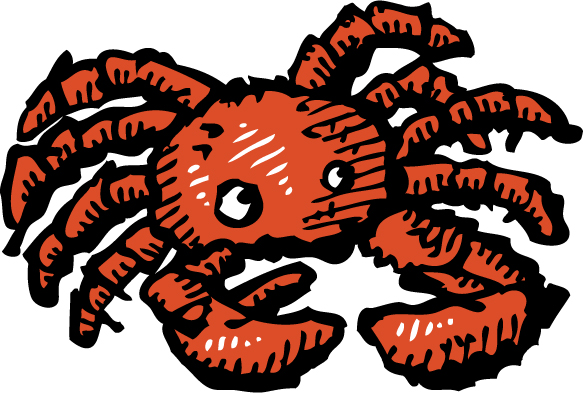 Crab cakes have been on my mind a lot of late—I’ve become ever more aware of just how many Roadhouse regulars tell me these are their favorite thing on the menu. Also because I’ve been writing about African American foodways and these have come up as one little asterisk of an item in that context. And lastly because I seem to been talking to a lot of Baltimoreans lately, most of whom I’ve mentioned below. One of them is Bonny Wolf, NPR food reporter, writer and recent visitor to the ZCoB, and author of, “Talking with My Mouth Full,” who wrote in her book that, “If the hard-shell crab is king of Baltimore foods, the crab cake is queen.”

I guess in the context of this issue of 5 Foods, you could say that crab is to Baltimore what cured ham is to western Spain. It’s really special, really good, and pretty expensive these days, but locals still really eat a lot of it. Unlike say good coffee in Guatemala, which is mostly exported, both ham in Spain and crab in Baltimore are still cherished and eaten most by the people who live in the local communities. I’d never say that what we have here is “better” than what you could get in Baltimore—why argue with a few hundred years of success. But I’ll say that what you get at the RH will be pretty darned close.

The crab cakes are nothing new here really—they’ve been on the menu at the Roadhouse since we opened, and over the last four years have clearly, if actually fairly quietly, become one of the best selling dishes out there. It’s Alex’s recipe and, despite lots of early pressure to make them bigger and cheaper (by using lower grade crab) he’s been very adamant about sticking to the roots of the dish. More power to him for this determination—they’re very good and they’re very much true to the way they’d be back in Maryland.

I don’t say that because of my own experience. Others have made the point. One long time regular in all the ZCoB businesses, former minister, now an attorney, music lover, and a man of strongly held views but few words, is a big RH crab cake fan as well. I was thinking he was from Baltimore but wasn’t sure so I asked. “Hey,” sounding serious, but smiling all the while, “I was born in the same hospital as Cal Ripken.” Ok, that’s serious stuff. “Many a night my father would come back with a huge bag of crabs and throw them down on the table on newspaper for us.” Asked for a comment on the crab cakes, he smiled again and said, “Loose. Very few crumbs.” When it comes to crab cakes, that’s “Balamorean” for “good.”

I’ve been writing a lot on African American foodways for the next newsletter. Baltimore was far from my mind when I started and I certainly hadn’t thought to include crab cakes in my composition. But, Adrian Miller (deputy legislative director to the Governor of Colorado, board member of the Southern Foodways Alliance, writer and a very funny guy) made mention of Chesapeake Bay cookery as being one of the four most important areas of African American foodways made me reconsider. Given the switch by Adrian, I had a belated glimpse into why so many of our best crab cake customers (including a woman whose community work I much admire and appreciate, the recently retired from Peace Neighborhood Center, Rose Martin) are African Americans.

Although it’s not really per se about cooking, check the book, “Crab Cakes” by Pulitzer Prize -winning—and relevant in this context—African American writer, James McPherson. I met him at the Roadhouse about two years ago while he was in town visiting from Iowa where he now lives. But Mr. McPherson is a native Baltimorean and a lover of crab cakes, as witnessed in this excerpt from his memoir: “These are a very special delicacy, made Maryland style. . . . All crab-cakes are good, but Maryland crabcakes have special ingredients, or spices, not found in those crabcakes made according to the recipes of other regions.” Agreed fully. And, I’m happy to report, he was duly impressed with, and very complimentary of, the ZCoB overall, the environment at the Roadhouse, and, in particular, the crab cakes (and the grits as well).

Opinions on the subject run strong, amongst pretty much everyone from the area. To quote baker and cook Mark Furstenberg, “As for crab cakes this is a very important subject not to be trifled with by anyone other than a Baltimorean.” As one, he gets to weigh in. After sharing his views, he ended with, “Everyone in Baltimore has a point of view about crab cakes. Mine, however, is the correct one.” Which seems to be true for everyone in the area! Fortunately I’m not from there so I don’t feel compelled to be correct. I just like eating the crab cakes at the Roadhouse ‘cuz they’re really darned good.

Now, all that said, just offering crab cakes on the menu at the Roadhouse isn’t any big thing really. What’s special here is that they’re made from only the top grade, fresh Maryland lump crab. In “Talking with My Mouth Full,” Bonny Wolf wrote that, “I use only lump crabmeat for crab cakes. This is the crème de la crab—big, white lumps of sweet crab meat. Alex has said this adamantly from the beginning—we use none of the lower grade backfin, “special,” and especially not the inexpensive but not very tasty frozen crab that comes here from Asia that are used in such profusion most places out there. The fresh lump crab costs literally three times as much or more than the low end frozen stuff. And if you use a lot of filler you can drop the cost even further. But the difference in texture and flavor is telling.

Teaching people who aren’t from the Chesapeake what a “good crab cake” is has been a challenge over the years. Out here in the Midwest most people are used to seeing size as the main key to quality, which anyone from Baltimore will tell you it isn’t. The thing is that when you work with the significantly lower in quality, but by far more frequently used, frozen crab that comes in from Asia you can keep costs down and size up. But it’s not the size—it’s the flavor, texture and the quality of the crab (only lump!), along with the use of only a noticeable but never too large a quantity of bread crumbs to bind and coat the crab cakes are critical. Most everyone calls for a bit of Old Bay seasoning and Alex has had that in the recipe from the get go. Mark, Bonny, Alex and most everyone else who’s cooking skills I hold in high regard says that the crab cakes should never be deep-fried, only broiled or pan fried, and we do the latter.

The key of course, in the end, is in the eating. I’ve realized that for us non-Balamoreans, part of the thing is the way we approach the eating. Good Maryland crab cakes aren’t really something you eat a ton of to fill up—you need a few other things to go with them if you want to do that these days. The crab cake dinner on the menu comes with Carolina Gold rice and sautéed spinach. Or order the appetizer and eat it with a bowl of soup or a salad.

I’ve come to look at crab cake eating like I would savor a really great chocolate truffle. You get a small bite to savor of really creamy, rich, full flavor—in this case crab, in the case of the truffle, cacao. While the actual eating doesn’t last long and it doesn’t really fill you up, you have to enjoy it, appreciate the finish, the soft loveliness of it. Give it a try next time you’re out fo