Southern Foodways Alliance (www.southernfoodways.com) is a non-profit organization whose mission is to

Sam Edwards, whose bacon will be served at this dinner, will be our special guest. He’ll share stories from his almost-century-old family business, and talk about putting the flavor back in bacon! (Check the recent article in the New York Times.)

The dinner, crafted by James Beard-nominated Chef Alex Young, and excerpted from Ari’s latest book, Zingerman’s Guide to Better Bacon, will feature bacon from beginning to end. Starting with appetizers, bacons hailing from all around the country will be the star of each course, including dessert. With vastly different flavor profiles (think olive oil here) these bacons represent the nuanced flavors of the better bacon being made by passionate individuals like Sam Edwards!

Join us for a fun and flavorful look at one our country’s most beloved foods: Bacon! 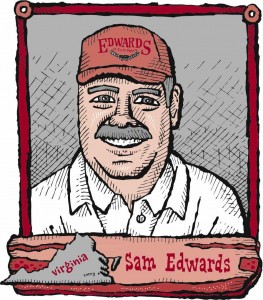 Check out the Makin’ Bacon Flyer!