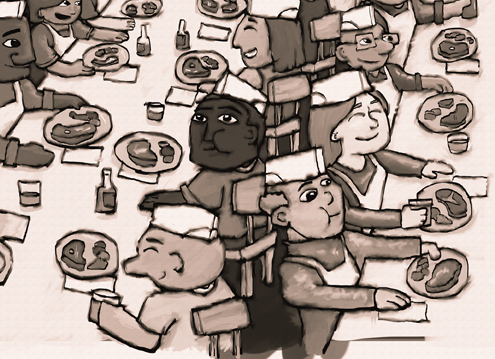 Beginning in the 1860’s, butchers would sneak choice cuts of meat into the kitchens of nearby saloons, grill them over coals and feast on them during Saturday nights-on-the-town. This New York City tradition became known as a “Beefsteak” – a simple, masculine feast of beef, lamb chops, kidneys and beer – with simple etiquette rules: knives, forks, napkins, tablecloths – even plates – were entirely optional. The Beefsteak became to New York, what a barbecue is to the South, or crab feast is to Maryland; a place to gather a community, often around a political cause or fundraiser.

Chef Alex will revive an almost-lost 19th century American tradition, crafting a meal using all Cornman Farms’ meats. Jan Longone, the Curator of the American Culinary History at the William Clements Library at the University of Michigan and the proprietor of the Wine and Food Library, will join Chef Alex and share the history of the Beefsteak.

← Previous: Hungry for Hungary with Zingerman's Bakehouse Next: America's Best Chefs Answer The Call To Serve Their Nation →