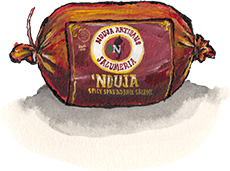 Over the years we’ve done a pretty darned good job of getting the great foods of the world to Ann Arbor. But this is one of the ones that all my wishing and hoping couldn’t seem to make appear. I’ve been wanting to make ‘Nduja part of my regular eating routine ever since I first encountered it in Calabria five or six years ago. I use the word “encounter” intentionally—eating ‘Nduja is not an insignificant experience. If you eat some casually at a party, I guarantee you’ll remember it. Like the Velvet Underground in its heyday, there’s nothing else like ‘Nduja on the market. And also like the Velvets, ‘Nduja isn’t for everyone. It’s anything but middle of the road and it’s not something for folks who aren’t up for eating on the edge of exceptional. Spicy, slightly sweet, buttery, powerfully porky, yet as smooth in texture as homemade strawberry jam.’Nduja is, almost inconceivably, both subtle and strong at the same time. And like the Velvets, if you like it, you’ll remember it and return to it regularly (as I have) for the rest of your life. I loved it when I first tried it, and I love it just as much six years later.

To be clear on the name, it’s pronounced “en-doo-yah.” It’s part of a subset of the Italian salami world that’s little known in the U.S. called “salami dal spalmare,” or “spreadable salamis.” In Calabria,’Nduja is every day fare. It shows up everywhere there, but I’ve almost never seen it anywhere else. Until, now! It’s made by finely grinding pork fat and meat, seasoning it with lots of spicy Calabrian chiles, and then aging the paste in a casing. If you don’t know Calabria, it’s remarkable for being one of the poorest of Italy’s provinces. It’s also the only region of Italy where almost everyone thrives on super spicy food. Chiles in Calabria are as commonplace as they are in Central America. The area around the city of Spilinga is the ancestral seat of ‘Nduja. Peppers arrived there from the Western Hemisphere in the 16th century, around the same time as tomatoes. If you’re familiar with French charcuterie, you could probably best describe ‘Nduja as a spicy, smooth-textured Calabrian pork rillettes. I’ve seen someone else say that it is to pork as Nutella is to chocolate. If you like it as much as I do, then it’s close to addictive. And if the Velvet Underground had been eating it, the song might have been titled “White Light, Red Heat.”

I’m super excited that this pork treat that I’ve been dreaming about for years is now available in the U.S. Although American import laws make it illegal to import ‘Nduja from Calabria, it is okay to import Calabrian ‘Nduja makers. Antonio Fiasche is one of those. He’s the fifth generation in his family to craft this special recipe on a regular basis, and his grandfather still lives in Calabria. In my hometown of Chicago, Antonio’s making some terrific ‘Nduja. Just as good, or dare I say it, even better than what I’ve had in Italy. Antonio uses only pork from old-school Berkshire hogs, a proprietary blend of five different chiles, and then ages his ‘Nduja for months. At the Fancy Food Show we sampled a specially made forty-pound piece that was aged for over a year! Antonio’s ‘Nduja really is remarkable.

What do you do with ‘Nduja Almost anything. Let it first come to room temperature to soften and let the full flavor come out. I spread it on toast. Add a spoonful or two to an omelet. Crumble a bit atop a pasta dish. But more often, I just eat it with bread and other antipasti— cheese, cured vegetables, some olives. In Ireland we tasted a dish that used it in the broth for steamed mussels—delicious! My personal favorite experiment is a bit of a Calabrian-American hybrid: a Zingerman’s Roadhouse burger on a bun that’s been spread on one side with a generous amount of ‘Nduja, on the other with a bit of mayo, and a small handful of fresh arugula leaves on top. It’s the Calabrian version of a burger with bacon. Man, was it good!

Whatever you do with it, I can pretty much guarantee that you’ll get some powerfully good, memorable eating out of the deal. This one alone made the food show trip totally worthwhile. If you like pork, you like spice and you like to eat, then ‘Nduja might change your life.