Get your Corn Dogs at the Roadhouse! 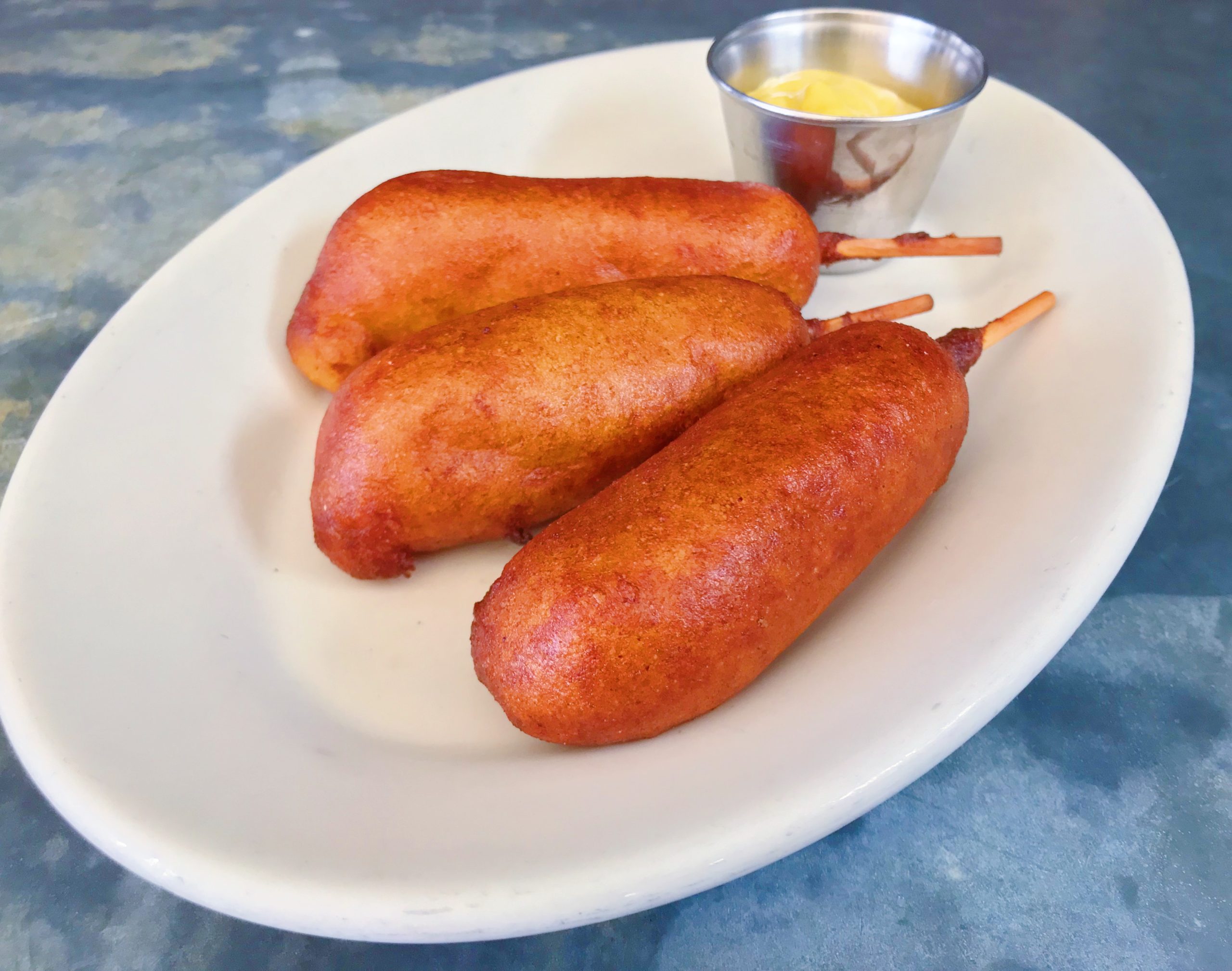 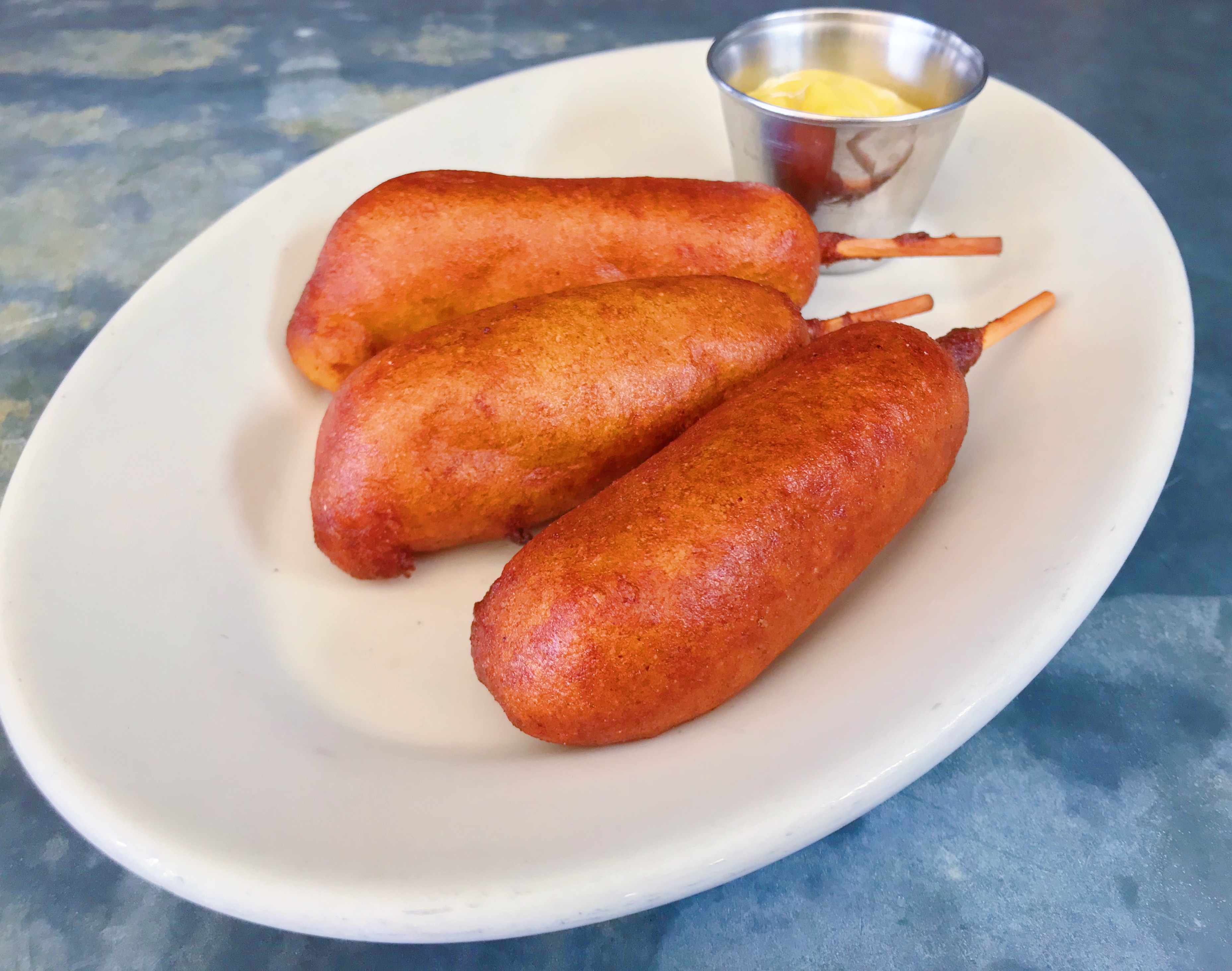 Whether it was at a local carnival or a Fourth of July picnic, eating corn dogs was a regular part of growing up in the Midwest. There was always something really handy about eating something on a stick, maybe because I could dip mine in a slathering of ketchup, as I did with most things. Little did I know that years later I would still enjoy corn dogs, especially after learning to appreciate really good ones like we have here at the Roadhouse.

Sometimes corny ideas are the best ones!

It is unclear who might have fried up the first corn dog. While we can seemingly credit the ancient Egyptians with the invention of deep-frying 7,000 years ago, the corn dog did not really earn its claim to fame until the 1940s. Carl and Neil Fletcher started frying up “Corny Dogs” at the Texas State Fair sometime between 1938 and 1942. The Pronto Pup vendors at the Minnesota State Fair claim that their corn dog in 1941 was the first. Corn dogs on sticks stole the show in 1946 at the Cozy Dog Drive-in, in Springfield, Illinois.

While they really seemed to take off during this time period at state fairs, drive-ins, and fountain shops, the corn dog can be traced back a bit further to 1929, when a “Krusty Korn Dog” baker machine appeared in the Albert Pick-L. Barth wholesale catalog of hotel and restaurant supplies. The ‘korn dogs’ were baked in a corn batter until they resembled ears of corn.

Regardless of their origin, corn dogs have withstood the test of time as a favorite treat in the United States and around the globe! Today, there are several countries that have their own version, including Australia, Canada, Argentina, and South Korea.

A good kind of germ!

I’m sure much of the draw with corn dogs has to do with the sugar in the corn batter. What child does not enjoy sugar? So while the corn dog stands up as a hearty snack, the main flavor I remember when scarfing these down as a wee lass was of sugar and ketchup, and less of actual corn.

The truth is, much of the commercial cornmeal we buy does not taste like corn. Typically what we buy from the local grocery is steel-ground, and has pretty much all of the germ from the corn kernel removed to improve shelf stability. But the germ is where all the flavor comes from! 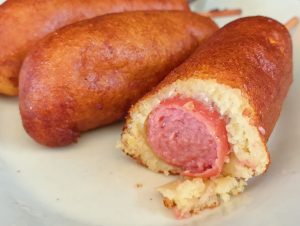 We get our cornmeal from Anson Mills, which is made with antebellum heirloom corn and is stone-ground with the germ partially intact. The current harvest is made from two varietals called John Haulk and Pencil Cob, which are field-ripened and coarsely ground. The result is a pure, sweet corn flavor that really comes through on an open crumb texture. We add buttermilk to the batter to give it a creamy balance, then fry each dog so it is a perfect golden brown.

Ever try black skillet cornbread? If you have, and it was cooked perfectly, then you might be familiar with that crisp, golden edge that gives way to a softer crumb. Every bite of our corn dogs reminds me of this, with the gently browned shell and the buttery center.

With our all-beef hot dogs and a touch of Raye’s Schooner Down East Yellow Mustard, the Roadhouse corn dogs are a favorite with many of our guests, no matter what their age. Stop in and celebrate National Corn Dog Day with us on March 17th, or any day of the year to treat your inner child!

Corn dogs are always on our Main Menu, but did you know we have a Kid’s Menu, too?

← Previous: Rhode Island Coffee Milk Next: Grits n’ Bits Waffles: All the Deliciousness in One Place →