New and Noteworthy Clam Burger at the Roadhouse 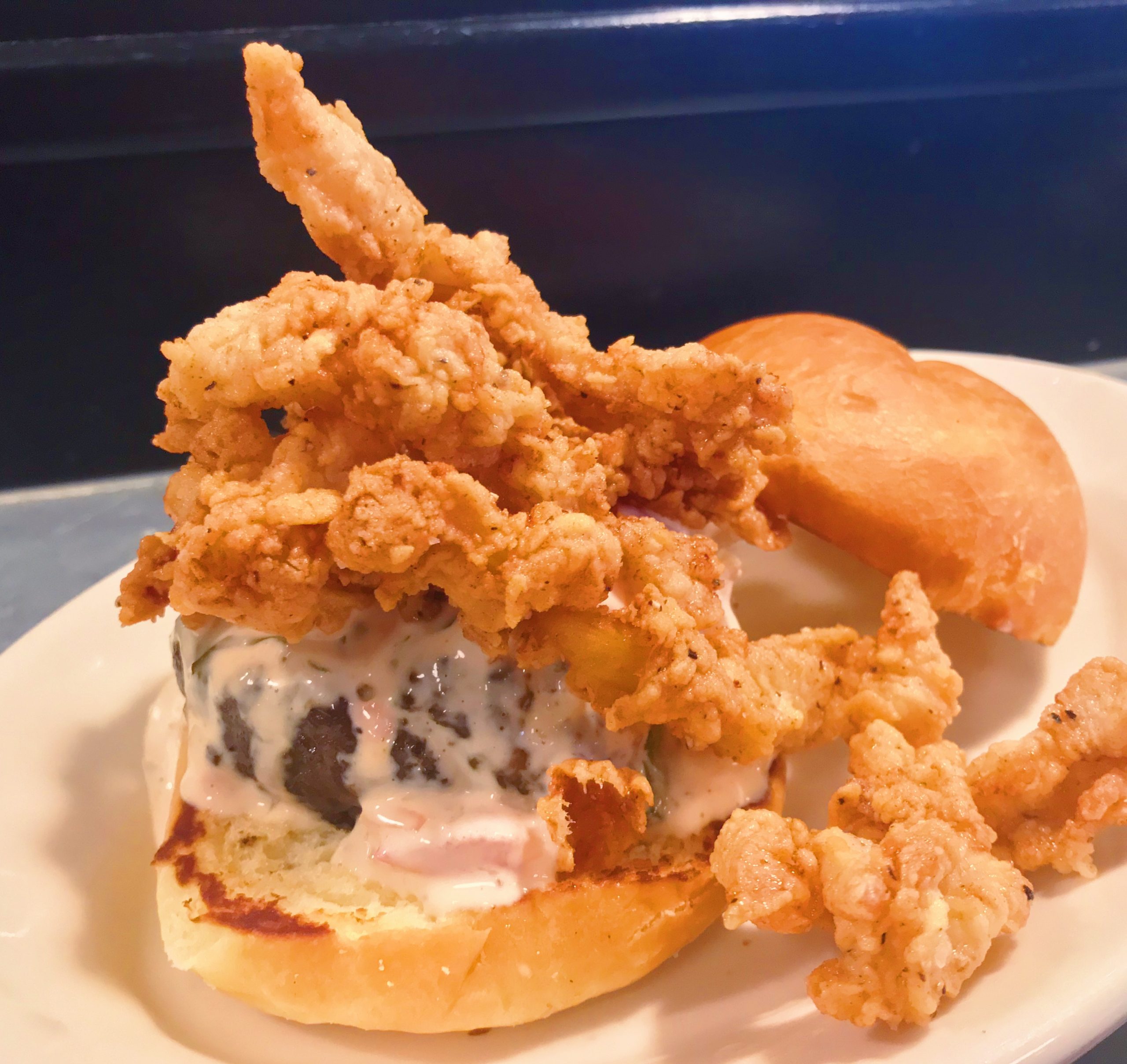 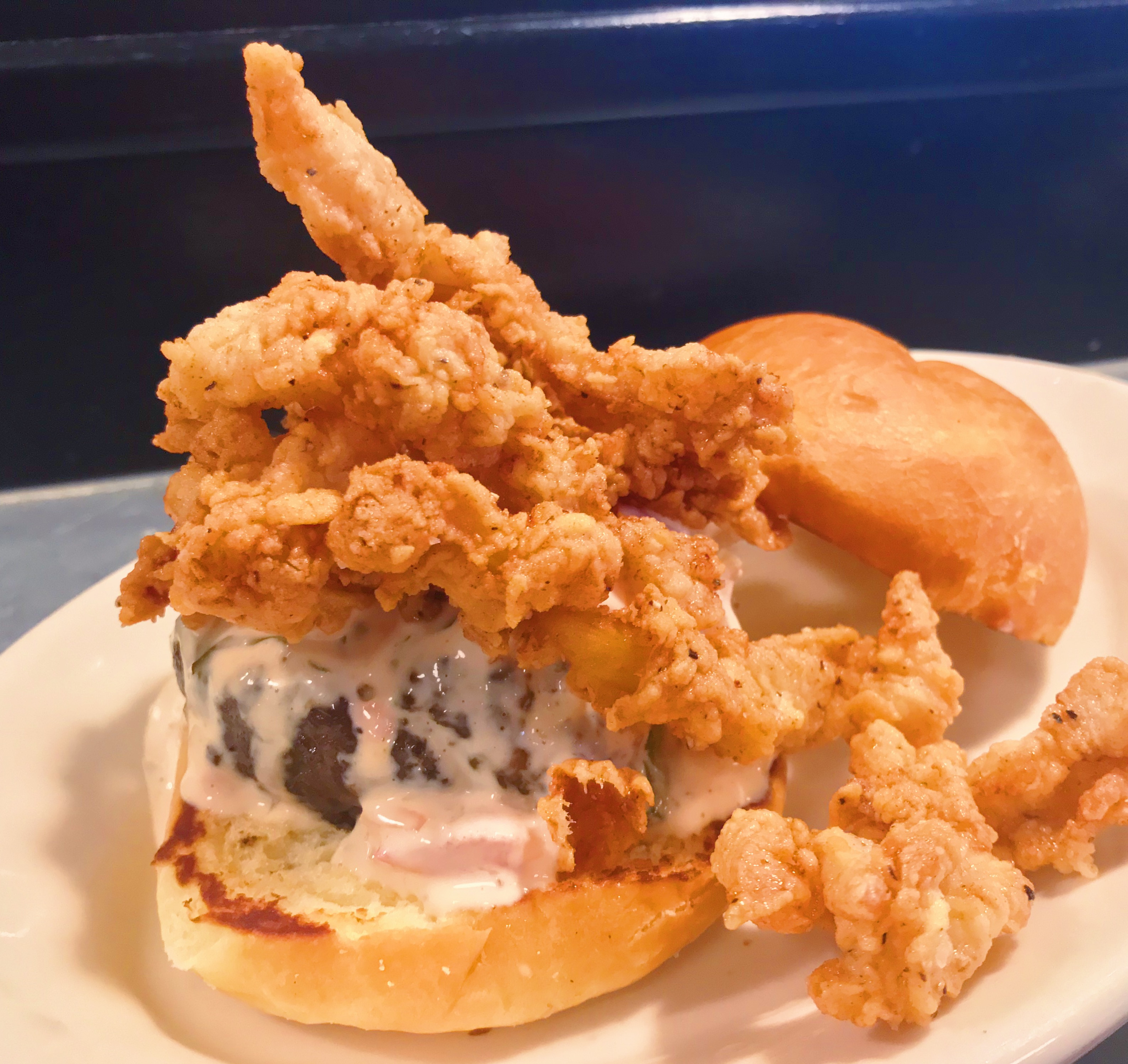 This is not something you see every day. It makes me think of a great summer diner meal on Cape Cod—a small pile of freshly fried Quahog clam strips, set atop a blanket of homemade Roadhouse tartar sauce sitting, in turn, atop the just-off-the-grill burger on a Bakehouse-made brioche bun. The burgers, if you haven’t had one lately, really are something special—pasture-raised beef, dry-aged, ground fresh daily, hand pattied, grilled over oak. Contrast that meatiness with the crunch of the hot, fried clams, the creaminess of the tartar sauce, and the pillow-y, down-to-earth elegance of the brioche bun and you can see why it’s so good!

Seriously, this great new burger makes me smile every time I see one heading to a table. And, more importantly, it makes me want to sit down to order one. I’ve watched a few times from afar as people bite into it. I love the look they have on their face. Since it’s new to our menu, they are curious, intrigued, even excited. They decide to order it, and then anxiously await its arrival, hoping it will be as good as they imagined it might be. And then when it comes, the visual affirms their intuition.

To take it up another notch still, we’re serving the Clam Burger with a side of what we’ve been calling “East Coast Fries”—our usual hand-cut, double-cooked, potatoes tossed when they’re hot and right out of the fryer with a healthy dose of Epices de Cru’s “East Coast Spice Blend.” It’s quite a spice-world lineup—celery seed, Indian black pepper, red chiles, ginger, Canadian mustard seed, Spanish paprika, Moroccan bay leaf, Indian clove, Jamaican allspice, Sri Lankan mace, Indian cardamom, and some Indonesian cassia. It’s exceptionally aromatic and, for me at least, liberally enticing. Philippe de Vienne once told me, “The East Coast Blend is what the original Old Bay would have tasted like back in the ‘30s.” I believe him—Philippe is rarely wrong. If the name weren’t already owned by someone else I suppose we could have called it the “old Old Bay.” The original blend, by the way, was “invented” by a Jewish immigrant to the U.S.— Gustav Brunn escaped Nazi Germany and came to the States in 1939. He named his blend for the Old Bay Line, a passenger ship that worked the Chesapeake Bay. Shortly after arriving, Brunn got a job at McCormick spice company, but, Brunn claimed, he was quickly fired when the company discovered he was Jewish. Ironically, McCormick bought Old Bay in 1990.  Said Phillipe de Vienne, “We reconstructed it from a pre-McCormick can with the complete list of ingredients. That was very helpful as a starting point, and with the flavor memory of the old blend and some inevitable personal touches we arrived at something that was inspired from the original and hopefully preserved the touch of genius of Gustav Brunn.”

The more important story is, of course, how good all this tastes. People have been “ooh”-ing and “aah”-ing about the Clam Burger for the last few weeks since it first appeared on the menu. It really is something special. Surf ‘n’ turf taken to a new, down-to-earth, excellent level. An all-around, all-American blending of textures and flavors, a fine finish, and a very fun meal. Order one, imagine eating it by the ocean, and send the summer season off in style!

Have you signed up for our weekly e-news?