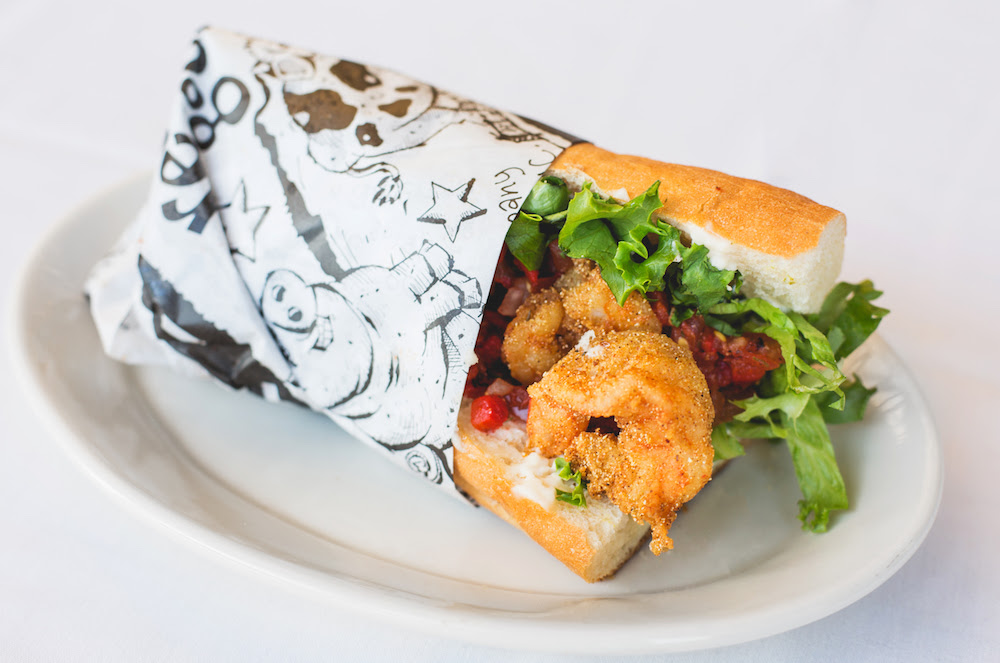 Shrimp and Grits, Po’ Boys and other good things to eat!

British Olympic cycling coach Dave Brailsford has an approach to progress: rather than waiting for some wondrous big stroke of success or genius to turn everything around, he argues, one should make a one-percent improvement every day. I agree—a small step a day adds up to big things over the long haul. This is very much how we’ve approached our work at Zingerman’s for all these years. We’re very committed to our visioning process—getting clear on the long-term future we choose to pursue—but at the same time, it’s all about small steps in the right direction.

There are dozens of these small quality improvements happening in the ZCoB every week. One of the more recent ones that’s on my mind is the new shrimp we’ve brought into the Roadhouse. Last spring, we began searching out something really superior, and after a bunch of phone calls, email exchanges, and collaborative conversations with folks around the country, we found our product, which we are now gettin in from Del Pacifico Seafood Company.

The really fabulous shrimp from the Gulf of Mexico we chose fits our ideal product profile. It’s wild caught and fished from small boats (known as “pangas”) using specially designed nets to avoid the endemic bycatch problem of industrial fishing. There are no motors on the boats to reduce pollutants, and because the boats are small, they return to the dock after only hours at sea (rather than days at a time). This shrimping group has the lowest percentage of bycatch and the lowest fuel consumption of any good-sized shrimping group in the world. Quick processing is critical to seafood quality, and this shrimp is off the boat and at the plant within hours of being caught. The fisherman are paid more for their product, which helps the community. And, they taste terrific!

Why are these Gulf Shrimp so good?

How good? One of our regulars ordered the shrimp and grits (made with incredible Anson Mills grits and topped with butter-sautéed shrimp) at the Roadhouse for dinner last week. On the way out, he stopped to say, “Hey, I eat out all over the world, and I’ve spent a lot of time in New Orleans lately. That shrimp and grits was seriously one of the best meals I’ve ever had. Anywhere!” Not five minutes later, another regular said the same thing: “Whatever you did to that shrimp and grits, it’s a keeper!”

Another great dish featuring this new offering is the Shrimp Po’ Boy on the lunch menu. A handful of these new shrimp, fried, are served on a soft bun from the Bakehouse and dressed with plenty of mayo, lettuce, and tomato, along with Roadhouse tomato relish. It comes with our Cajun fries (tossed with blackening spice). I had one the other day—terrific! The story of the po’ boy dates back to 1920s New Orleans. Two brothers, Clovis and Bennie Martin, decided to make a sandwich they could give away to striking street car workers. They gave the sandwiches for free to union members—hence the name—a sandwich for “poor boys” who had no money! Now, it’s a way of life down in New Orleans. With this new shrimp we’re excited to make the shrimp Po Boy at the Roadhouse part of ours.

While it’s still warmish out, come sit outside and enjoy an excellent lunch!