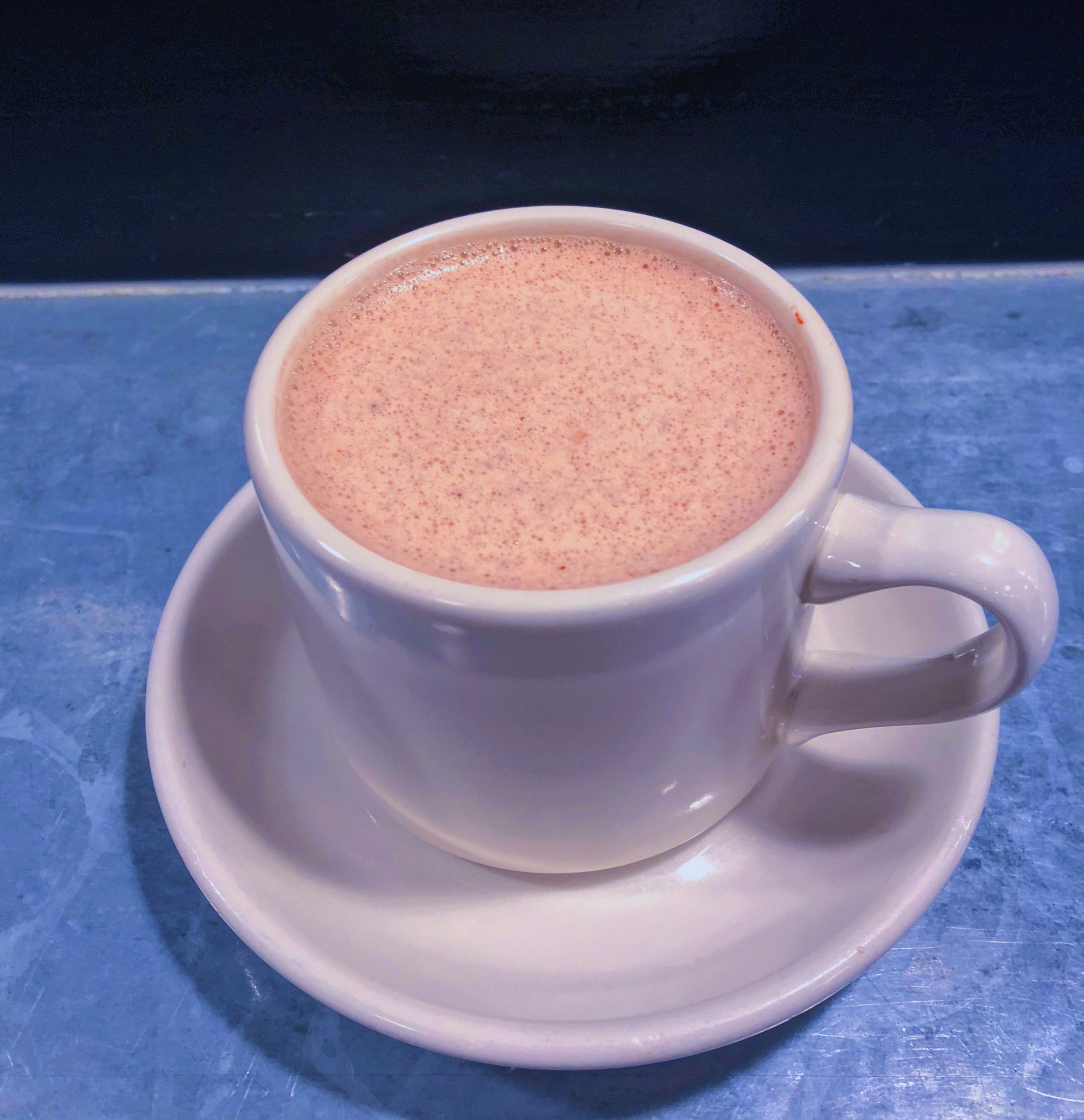 A yummy new way to stay warm from the Roadhouse!

My math tells me we have about another five weeks until the formal end of winter. And then, of course, it could still be anywhere from a few days to a few months before warm weather actually arrives. In the meantime, and even then I suppose, we have this killer new single origin hot cocoa at the Roadhouse.

I met Tom and Monica Rogan from Goodnow Farms at the Mercantile artisan food show in San Francisco a few years ago. They’ve spent the last decade working around South and Central America to develop a line of direct trade, bean-to-bar chocolates. I was impressed with the chocolate and the choices they’d made about trying to work in sustainable ways. The Rogans are working from a two-centuries-plus-old farm in Sudbury, Massachusetts—it’s located on Goodnow Road, hence the name for their business.

While the cocoa itself is made in western Massachusetts, the beans come from a farm in Mexico. In the spirit of all the great chocolate bars we get from friends like Shawn Askinosie, French Broad, and others, this is a single origin sourcing for their cacao. The Hacienda Jesus Maria is a 175-acre farm, 120 acres of which are planted with cacao. The farm is just a bit inland from the northeast coast of the Gulf of Mexico, past Veracruz, due north of Chiapas. It’s very rooted in its community—the farm has a 100-year history with cacao (even longer than the Appleby’s have been at it with Cheshire). The Rogans share that, “Farmer Vicente Alberto Gutierrez Cacep employs the best farming and processing practices, and he strongly supports community initiatives and local businesses, including those owned by women. Vicente looks for a balance of life on his farm and also releases indigenous rescued animals back into the plantation, including monkeys and marsupials.”

I was caught by the non-Spanish surname. Turns out its of Turkish origin. Vicente’s grandfather moved to Mexico from Turkey years ago and started the farm. The backstory? Tom shared that, “Monica found farmer Vicente when she was in Tabasco for a friend’s wedding.  She took a couple extra days to drive around the area to see what she could find, and stumbled upon him completely by chance. He has an incredible farm—he also does something rare with cacao farmers which is fermenting and drying his own beans. You need a large enough volume to make it work – not to mention quite a bit of skill.”

Goodnow is one of the few chocolate makers (along with Shawn Askinosie) who make their own cocoa butter as well as finished chocolate. While most mass market cocoa powder is alkalized (which means it’s washed with a solution of potassium carbonate), the Rogan’s (and Askinosie’s) is a different story. As the Rogans write, “You may need to stir your hot cocoa a bit more vigorously but you’ll get the full benefit of cacao’s flavanols and taste the unique flavor of the beans!” While I’m not suggesting you seek out this cocoa strictly for physical gain, there do seem to be a host of health benefits.

The idea of working directly with growers is not unique to the Rogans, but it certainly seems a very good thing for many reasons! The Rogans are really passionate about it. “While we’re open to working with producers who are Fair Trade certified, we prefer to buy our cacao using the direct trade model. We strive for as true a direct trade relationship as possible, although in some cases there’s still a middleman (more on that later). In some cases, such as this Mexican Almendra Blanca bean, we go so far as to have the beans picked up at the farm and brought directly to our door. Can’t get more direct trade than that. We make our delicious hot cocoa from the same premium single origin beans we use to make our chocolate, so each variety has its own unique flavor profile!” Why the name Alemendra Blanca? “The beans are really rare in that they’re white, as opposed to the purple color that’s far more commonly found.

This is, I should make clear, hot cocoa, so it’s lighter, more delicate and not the sort of intense chocolati-ness that fanatical chocolate lovers might be after. It’s got a great, subtle, nuttiness that I’ve found superb to sip along with a nibble of something sweet.

Come by the Roadshow or the Roadhouse today to try it out.