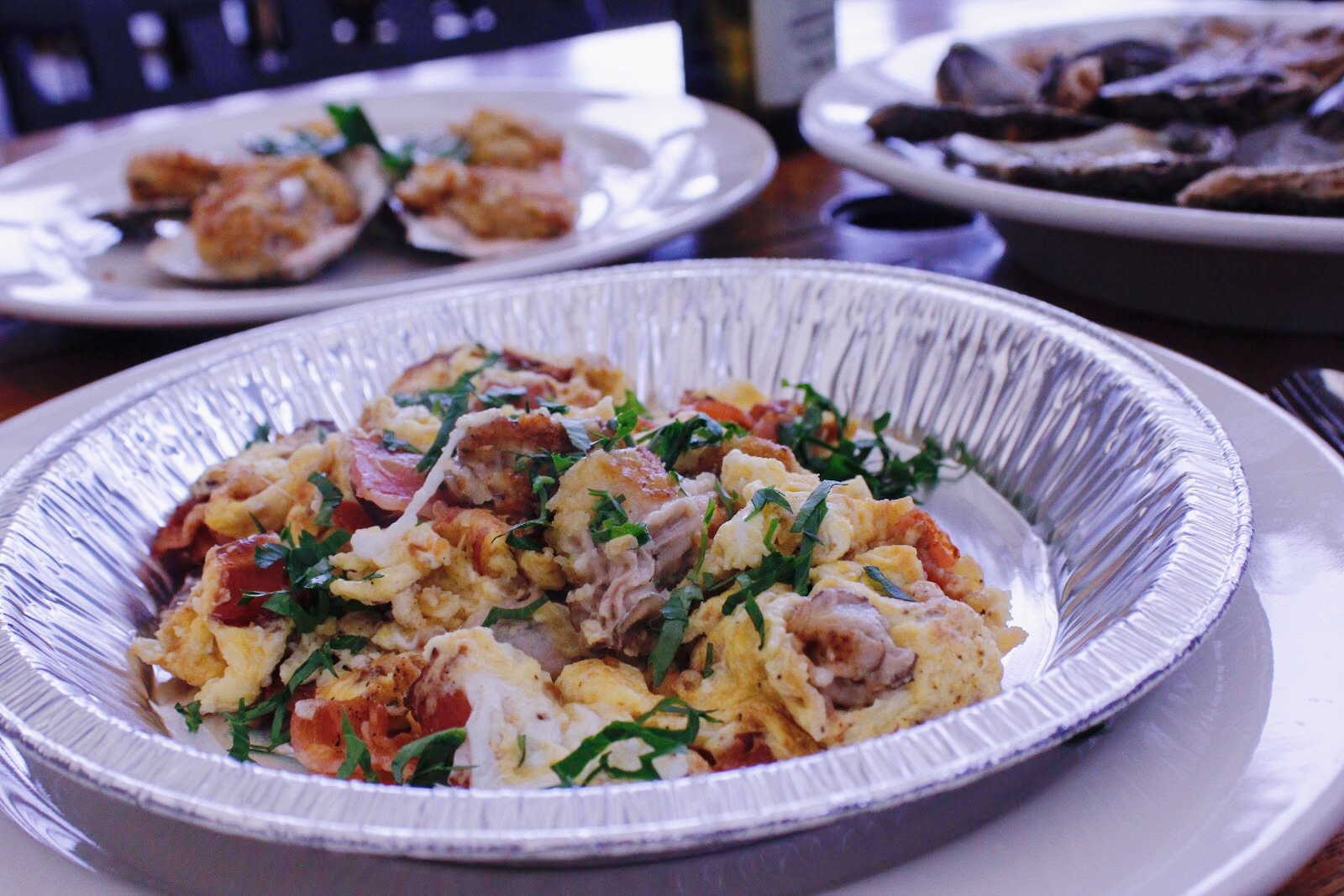 Oysters and bacon and eggs….oh my!!

Zingerman’s Roadhouse has secrets. Or zecrets, if you’d rather. And they are not well-kept. We want you to know about them!! So what makes them zecret? They are not typically published on our menu. But you can certainly come in and ask us to share them with you!

One of our favorites is a breakfast dish with a rich history. It’s called Hangtown Fry.

Only the best for your breakfast!

Ever since its creation in Placerville, CA (then known as Hangtown) during the Gold Rush in the 1850s, the dish has graced the tables of the nation’s leading hotels and restaurants. No wonder, as it is quite scrumptious! Ari tells more of the story below, but legend has it that it was made for a man who struck it rich with gold, then asked for an expensive meal at the local hotel to celebrate.

Hangtown Fry was actually on our breakfast menu at the Roadhouse years ago. When I asked Chef Bob Bennett about it, he recalled how it was served in pie tins from Zingerman’s Bakehouse. It did gain enough of a following that after we took it off the menu, we still had people come in and request that we make it just for them,

You don’t have to strike it rich to order it.

Here’s how it works. You come in and ask for the Hangtown Fry, and we will pan fry our chef’s selection of oysters for you with Nueske’s applewood-smoked bacon, bread crumbs, and farm-fresh eggs. It’s a hearty breakfast, and the smokiness of the bacon is perfect with the sweetness of the plump oysters. Come on by for breakfast or brunch and treat yourself to this zecret favorite!

Or you can make it at home with Ari’s recipe:

Oysters, eggs and bacon in one really good all-American dish, Hangtown Fry is a California classic that’s long been one of the most popular items on the Roadhouse brunch menu. I love it because it’s simple to make, it’s delicious and it’s got a great story to boot. I like to use a dry-cured bacon like Broadbent’s because that’s the sort of intense, long-cured bacon that Gold Rush-era cooks would likely have been working with.

The story of Hangtown Fry takes you to a northern California town originally known as Old Dry Diggins, then as Hangtown and now Placerville. Back in Gold Rush days it was a prominent supply town – many of the area’s miners went there to restock and cut loose, and, while they were at it, often got themselves into a bit of trouble. The name Hangtown came about in the middle of the nineteenth century, when three bad guys were strung up on the branches of a big old oak in the center of town. I’ve been told that the stump of that old oak is still “stuck in the mud” (so to speak) in the basement of a bar called The Hangman’s Tree (which you’ll be able to find quickly by the body hanging from a noose off the front of the building).

The dish is said to have originated at the now-defunct El Dorado Hotel, just across the street from the hanging tree. Legend has it that a miner rolled into town with gold from a fresh strike and ordered the saloonkeeper to serve up his most special dish. The cook offered a choice of three high-end options: oysters, eggs (hard to transport and hence costly) and bacon. The miner told him to toss all three into one dish, and Hangtown Fry was born.

It’s a very versatile recipe – great for brunch, lunch or a light supper. Don’t skimp on the egg quality – remember, they were a luxury in mid-nineteenth-century Hangtown and remain a key component of the dish, not just a way to hold the oysters and bacon together.

Since I almost never see single-serving recipes in cookbooks, I decided to design this one that way. But of course the quantities are easily increased for any number of diners. You can vary the number of oysters according to how much gold you’ve got in your pouch.

Dredge the oysters in the cracker crumbs. Leave them resting for at least 10 minutes so that the crumbs bond with the oysters.

In a non-stick skillet, cook the bacon over medium heat until crisp. Remove from the pan, leaving the bacon fat. Reduce the heat a bit and add the additional measure of fat. When hot, add the oysters and cook for about 2 minutes, stirring gently, until the crumb coating is lightly browned.

Add the beaten eggs, salt and pepper, and stir gently. Add the bacon. Cook over low heat, stirring gently every 30 seconds or so, until the eggs are done as you like them.

Serves 1 generously as a main dish, or 2 as a smaller side dish

Check out our brunch menu for other offerings!