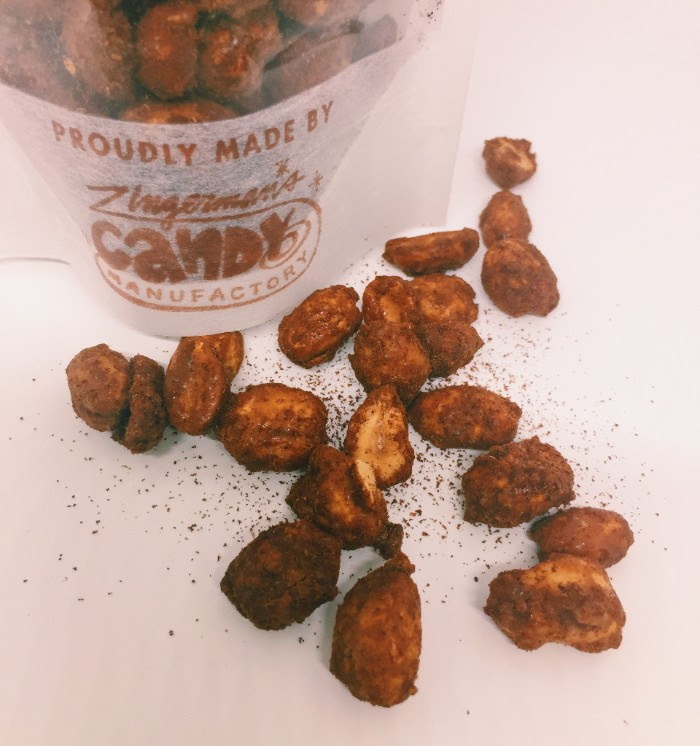 Big flavor in a small package.

I was sitting in the monthly Marketing Meeting yesterday, and a bag of the cinnamon peanuts from Zingerman’s Candy Company was being passed around. We all took a handful to taste as we chatted about upcoming promotions and worked through our agenda.

My handful of peanuts was gone in seconds. As soon as the bag had made its way around the table, I got up, walked around all the way around, and shamelessly snagged another handful. I wanted to take the entire bag, truth be told.

Zingerman’s Candy Manufactory released their flavored peanuts made with spices from our beloved Épices de Cru a couple of years ago, starting with a sweet chili flavor. The salt and pepper variety soon followed, offering a lively smoky heat. Then, for those of us with the ultimate sweet tooth, the cinnamon peanuts arrived.

I was in trouble.

The Virginia Runner peanuts we sell through Mail Order and cook with at the Roadhouse are already delicious. But then they are toasted in butter, tossed with Muscovado brown sugar, a bit of sea salt, and two kinds of cinnamon.

Double the trouble. I fell in love.

Will the real cinnamon please stand up?

Zingerman’s has been sourcing its spices from Épices de Cru for years now. The de Vienne family travels the world for only the best spices, working closely with the families who produce them. The two spices we get from them for our peanuts are super high quality. Interestingly enough, one of the two is considered to be true cinnamon, and the other is not.

We are not surprised that the cinnamon Épices de Cru brings us from the island of Sri Lanka is some of the best in the world. It comes from the bark of the cinnamon tree, from a village that is actually called Cinnamon. When you smell it, you immediately understand why this is the true stuff. Also known as Ceylon cinnamon, the velvety red powder is deeply aromatic and sweet, like a winter holiday.

A cinnamon by any other name…

The other spice is what many people call cinnamon, but is not considered to be the real stuff. It is what we often buy in the store under the name of cinnamon, but is actually called cassia.

So wait a minute. Zingerman’s is known for high quality, authentic ingredients. Why would we use a spice that is not “real’? Just to clarify, there is nothing wrong with cassia. We bring in Indonesian cassia from Épices de Cru, and while it is not considered to be true cinnamon, it is delightfully different and adds another layer of flavor to the peanuts. It is more prominent and offers spicy, floral and woody notes.

Why two is better than one.

Once you try the cinnamon peanuts, you will understand why the two spices work harmoniously together. There is a nice balance of earthiness that rounds out the sweetness. In this video, Épice de Cru explains the differences between them, but also talks about how awesome they are as a pair.

At the Roadhouse, we sell the cinnamon peanuts in small 3oz bags and larger 6oz bags. Personally, I just skip to the larger bag so I can get my fill of the light and buttery toasted snack, coated with layers of soft spices that will take you to a whole new level of rich flavor. And I suppose I buy the larger bag so I can pass them around the table, too.