Fried Ribs at the Roadhouse 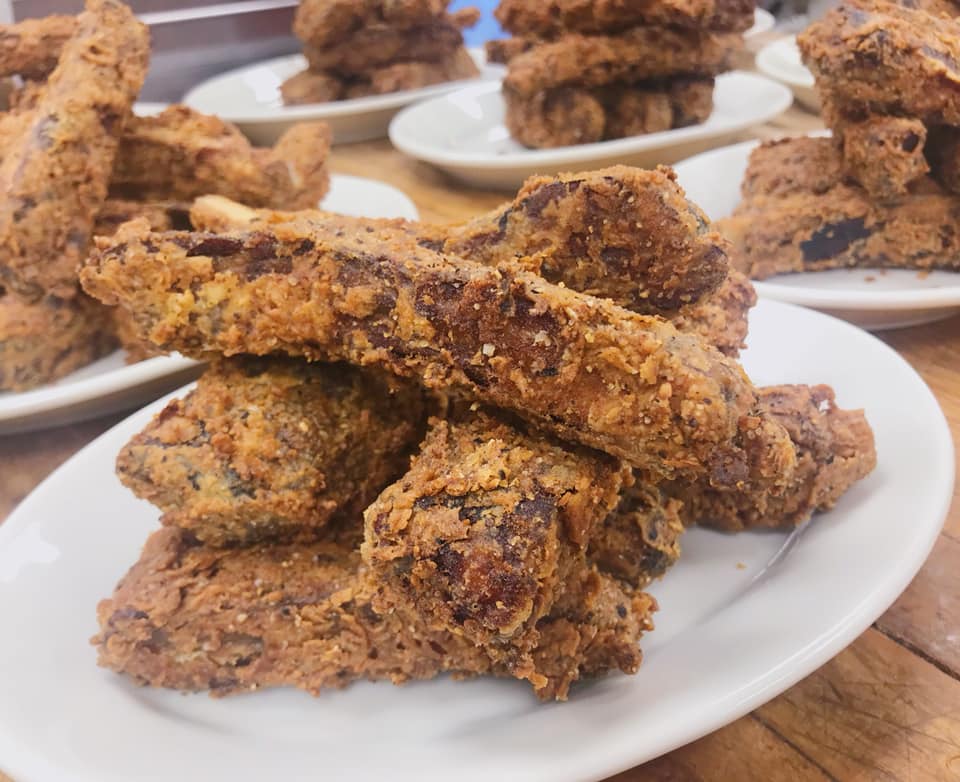 This week, the Roadhouse is marking the much-awaited return of Fried Ribs!

What makes our fried ribs so good?

About 18 months ago, chef Bob Bennett brought a new dish to the Roadhouse; something seemingly simple, but one we’d never done before. It worked. Fried ribs rocked the house! Single bone sections of the Roadhouse’s already huge selling BBQ ribs, floured and deep-fried—essentially they’re chicken-fried ribs—and then finished with a generous drizzle of the amazing artisan cane syrup we get from Charles Poirier down in Lafayette, Louisiana. The only problem? They got so popular that our demand far exceeded Charles’ supply. His production is small—solely by hand, the way it was done 200 years ago. Which meant that about six months after they hit the menu, they were gone. After all, sugar is an agricultural product. And since Charles grows all his own sugar cane, there wasn’t anything he could do. I tried, to be honest, to find a suitable substitute but, not shockingly, nothing came close. Charles’ syrup is super special. So, impatiently, we waited. Now, finally, the new season’s syrup is here! Which means that fried ribs, in all their deep-fried, full-flavored glory, are back. If you’re one of the many who came to love them in their six month stint, you may want to join me and your fellow fried rib lovers in a loud round of “Hallelujah!”

It starts with really good pork.

The dish starts with the same super popular, super good pork ribs that the Roadhouse sells so many hundreds of a week. Free running pork, raised by Niman Ranch farmers here in Michigan, baby back ribs, liberally spiced and then set on the pit over oak smoke for about three hours. From there they head back to the kitchen where they braise for another three hours, and then they’re left to steam for another three hours still. When you order a rack, the slabs go onto the grill over more oak wood smoke, and then get topped with some of our Red Rage barbecue sauce. The fried ribs take a bit of a side road—they get cut into individual ribs, dipped in buttermilk and seasoned flour, and then dropped in hot oil in the deep fryer. It doesn’t take long before they come out golden brown and hot. We drain them quickly and then drizzle them with that oh-so-fine artisan cane syrup.

The syrup is a story in itself. I met Charles at a Southern Foodways Alliance symposium about ten years or so ago. Charles raises the cane, crushes it, and boils down the juice. One hundred fifty years ago, half the state of Louisiana probably did the same thing. Today, best I know, Charles is the only one that’s still at it. He was proffering tiny bottles of his yet-to-be sold syrup. I tasted it straight from the bottle. It was mind-blowing. The 2019 crop is just as good as ever. The New Orleans Advocate wrote that “This coveted ingredient is Poirier’s Pure Cane Syrup, and it has lately been trickling into the culinary arsenal of well-known New Orleans chefs. The amber-hued delicacy is produced by Charles Poirier, following the same method used by his great-great-grandfather, Anatole Poirier (1873-1941). ”

Stop by and order some up Fried Ribs. You could make a meal out of them if you order them with some mashed potatoes and collard greens. Either way, if you like barbecue, good pork, a touch of sweet and a bit of spice, they’re surely going to be a hit with you too.

They are on our dinner menu, along with so many other really good things!

← Previous: Corpse Reviver no. 2 Next: Smoked Ribeye at the Roadhouse →