Smoked Ribeye from the Roadhouse 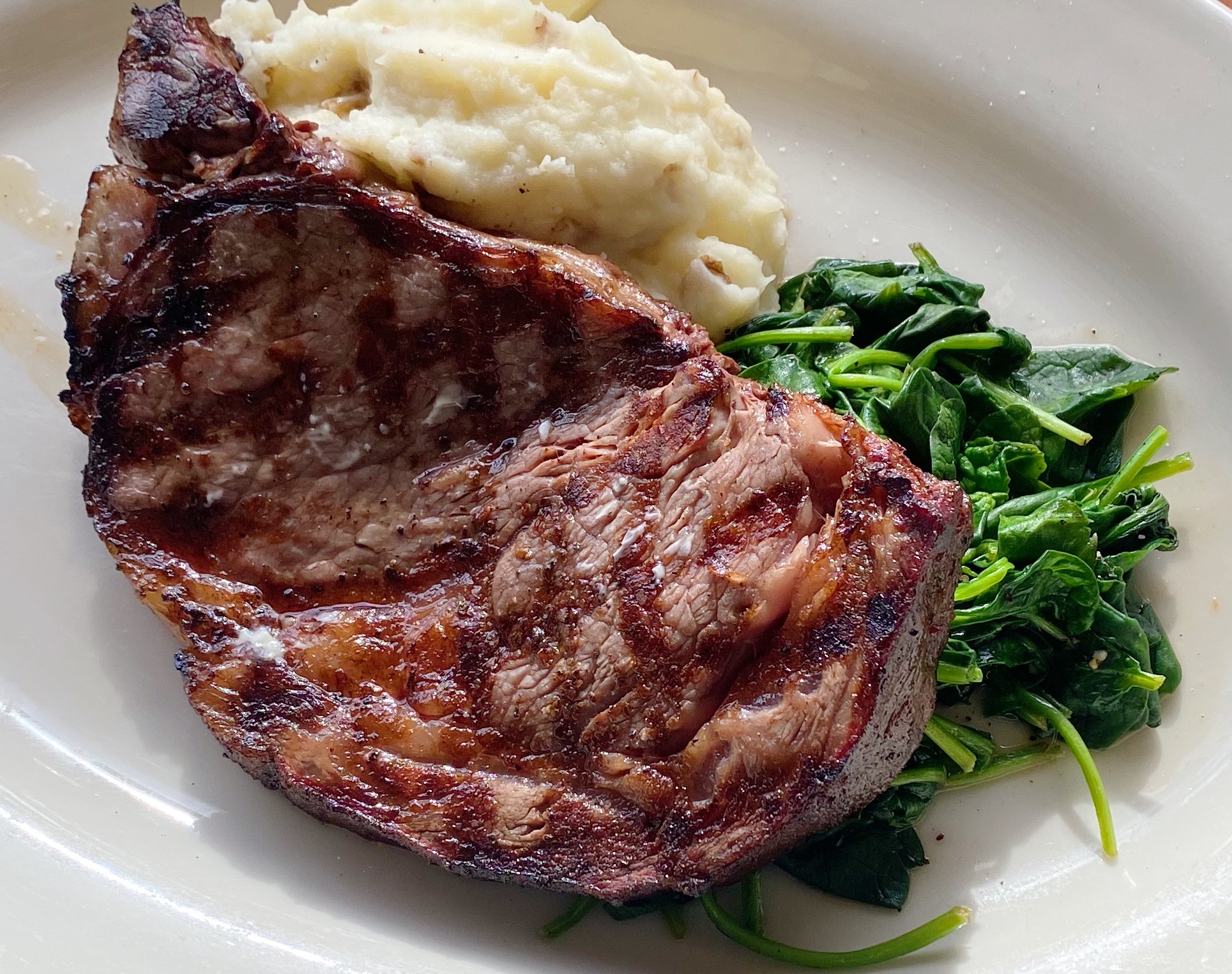 The marriage of steak and barbecue is a beautiful thing to behold.

If you’re not in the mood for cooking at home, here’s a dinner that takes weeks to get ready, but all you need to do is drive over (or bike or walk if you live nearby) and order it! It’s a dish that’s rapidly becoming a Roadhouse favorite.

How the smoked ribeye started.

The Smoked Ribeye came on the menu for the first time about six months ago, and each time we take it off for a few days, people start asking for it again. As a result, it’s now on the dinner menu regularly. (It’s not on every night so it can’t hurt to call before you come in.)

So what’s a Smoked Ribeye? Someone described it to me last summer “as the best possible marriage one could imagine between steak and barbecue!” Hard to argue with that. A little bit of smoke, a nice piece of beef, a whole lot of flavor.

How the smoked ribeye is made.

It begins with pasture-raised beef from a couple of farms within an hour from here. The beef is dry-aged—the way all good butchers would have done 60 or 70 years ago—for about a month, and then butchered from whole sides right here in the Roadhouse kitchen. For the Smoked Ribeye, we start by seasoning the beef with a mix of cayenne pepper, paprika, salt, and freshly ground Tellicherry black pepper. The whole piece is then smoked here on the pit over smoldering whole oak logs for about two hours. When you order a Smoked Ribeye for supper, we finish it on the wood-burning (or “live fire” as many folks are now saying) grill. We typically serve it up with mashed potatoes and sautéed spinach, but of course, you can switch up the sides if you want (a little Roadhouse mac and cheese maybe?).

Is it good? Yes! Really good! So many people have told me the Smoked Ribeye is one of the tastiest pieces of beef they’ve eaten in ages! A few have said “ever.” Longtime Roadie Chris Domienik says, “It’s one of the best things on the menu. The smoke gets totally into the steak and it’s just so juicy and . . . It’s just awesome!” I took a Smoked Ribeye home for Tammie to try the other evening and my whole car was perfumed by the smokiness. Neither she nor I eat much meat but the Smoked Ribeye was so compelling it was gone in minutes! Smoky, savory, rich, meaty, and pretty darned marvelous!

Learn more about our dry-aged steak!