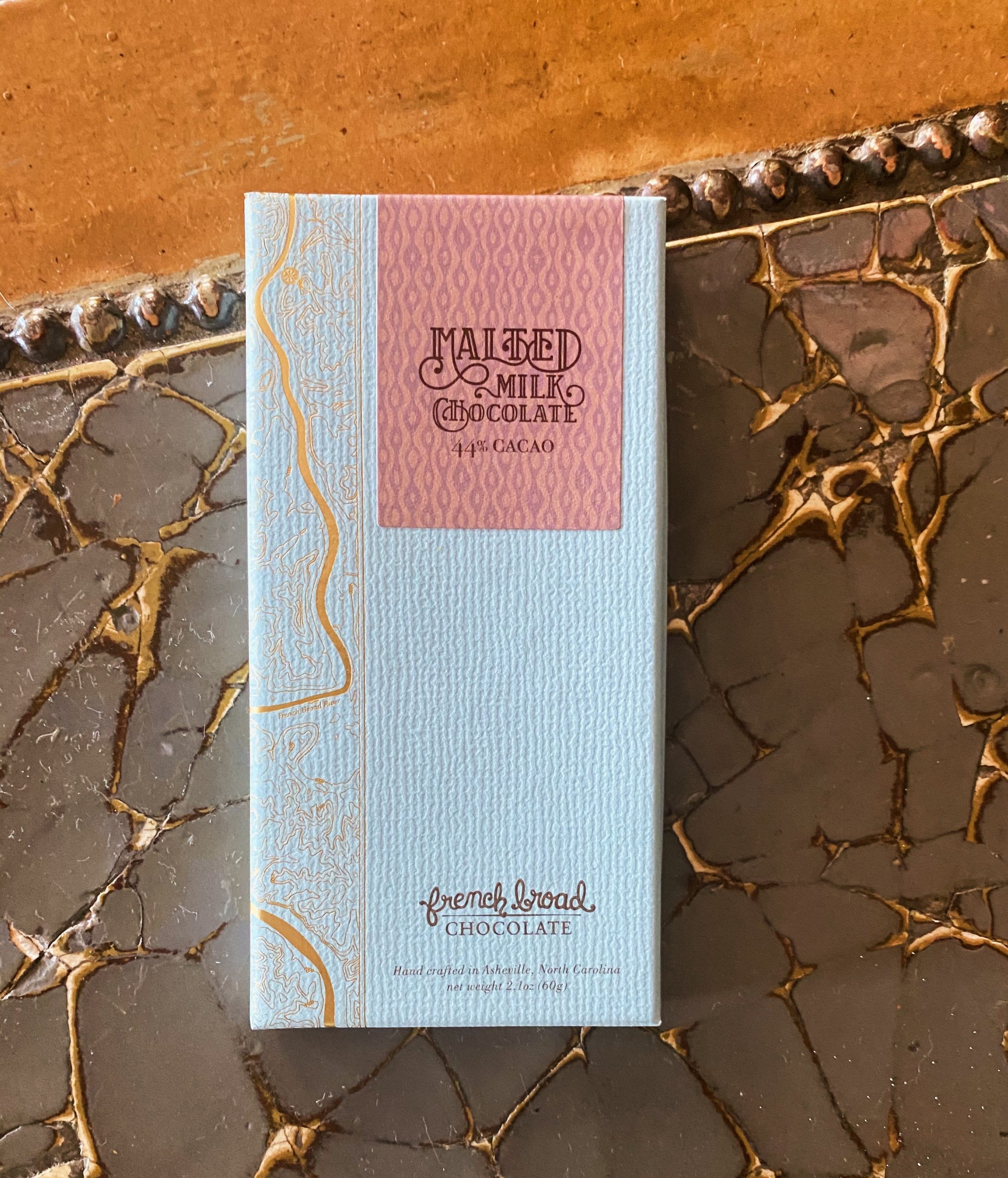 A new chocolate arrival with intriguing roots in the past.

It doesn’t cure coronavirus. You can’t use it to pay your mortgage. It won’t fix the food shortage. It won’t work as a mask. But if you want to add a small bit of culinary beauty to your day, consider a small bite of the Malted Milk Chocolate Bar from our friends at French Broad Chocolate in Asheville.

Creativity, I would suggest, usually comes when we connect things that haven’t been previously connected (for much more on the subject, see “Secret #39” from Part 3). At first glance, you might not give this bar high marks for creative innovation. In a way, nothing about it might seem all that different. Good chocolate. We have loads of it. “Bean to bar.” Check. Blending chocolate, milk, and malt? More on this in a minute, but it was “invented” 98 years ago. So what’s the creative innovation here? It’s the idea of combining world-class artisan chocolate with world-class malt in the form of a chocolate bar. Far as I know, it’s never been done! (Shawn Askinosie does make some superb Malted Milk Balls). And what I know for sure is, it’s really good!!

The bar, as I mentioned above, comes to us from my friends at French Broad Chocolate in Asheville. I’ve long liked all of their bean-to-bar chocolates—the Peru is one of my favorites and I love the Nicaragua for both its flavor and because it brings a cacao “origin” to the U.S. that’s rarely seen here. The Malted Milk bar was one of the last of the French Broad Chocolate list that I tried—I’m generally a dark chocolate eater, and I rarely eat milk chocolate. My mistake. Now that I’ve tasted it, this one has me hooked. Caramelly, toasty, it has something special, an edge of excellence that I haven’t quite been able to pin down. Or put down—I’ve gone back to it to taste and taste again about 10 times in the last week.

I asked Jael Ratigan, one of co-founders of French Broad Chocolate, how the bar came to be:

Malted Milk was one of the first bars that we made when opening our Chocolate Factory in 2012, so…eight years ago! It’s our most popular flavor, really exemplifies our sourcing values. It’s won national and international awards. The malt bar definitely has a backstory. All of our products do! (We have that in common with you at Zingerman’s.) Asheville has won national attention for its thriving craft beer scene, boasting more breweries per capita than almost any other U.S. city. Rising up to support this industry is a new kind of malt house, one that provides locally-farmed, artisan malts that bring depth and character to beers. We are honored to collaborate with this innovative business, Riverbend Malthouse, to bring you our Malted Milk Chocolate: a milk chocolate featuring Heritage barley malts, locally milled by community grain miller, Carolina Ground. To create this chocolate, we toast malted barley, and grind it with our cacao, organic sugar, Humboldt Creamery organic milk powder and organic browned butter. This chocolate has a creamy, malty flavor, with aroma of nutmeg and cinnamon. It might bring you back to your youth, when “malt” meant a light, chocolatey milkshake.

The story of malt.

To Jael’s point, probably every American will have heard of ordering a “malt” or maybe even a “malted milkshake.” But few of us—certainly not me—know the backstory. I’m guessing many might not even know what malt actually is. Let’s start with the latter. Here’s what the founders of Riverbend say:

So, what is malt? Simply put, malt is the soul of beer. It provides the color, body, flavor, and mouthfeel in every beer. A wide variety of cereal grains such as barley, wheat, rye, corn, and oats can all be malted using the standard three step process of steeping, germinating, and kilning.

Better barley and more careful craft mean better quality malt. Check their website and you’ll see what I mean. The idea of mixing malt with chocolate and water was done in the latter half of the 19th century. But what took the “malted to fame” was the invention of one “Pop” Coulson who worked for Walgreen’s in 1922. Walgreen’s drug stores started in my hometown of Chicago in 1901. The first store was at the corner of Bowen and Cottage Grove on the city’s Southside (about five miles north of where we lived just off 71st St. when I was a kid). It was the year before my grandmother arrived in the city, a young girl, from Lithuania and also when Rocco Disderide had the Deli’s building built. It was earlier in the same year Elisée Reclus wrote his insightful letter to his anarchist comrades. Like Disderide’s, the original Walgreen’s was mostly about the selling of food.

The malted milkshake is born.

By the time the Spanish flu was winding down in 1919, Walgreen’s had 20 stores. The company really took off in the 1920s—they found an unplanned opportunity with Prohibition when pharmacies were allowed to still sell whisky to folks who had a prescription from their physician. Back then, drug stores were thought of as much for lunch counters as they were for filling prescriptions. In 1922, Mr. Coulson, already renowned as a master of soda counter concoctions (a mixologist of his day), had the inspiration to add a couple scoops of the store’s famous vanilla ice cream to an otherwise dairy-less “malt,” and made the first “malted milkshake.” For much of the 20th century, Coulson’s invention was a big seller all over the country.

This bar from French Broad Chocolate brings that creative invention into a new 21st-century form. Maybe we’ll work with the French Broad Chocolate folks to start planning a centennial celebration for the malted milkshake in 2022! In the meantime, stop by the Candy Store or the Roadhouse to grab a bar (or two) of this terrific new arrival from Asheville.