Peanut Brittle from the Candy Manufactory 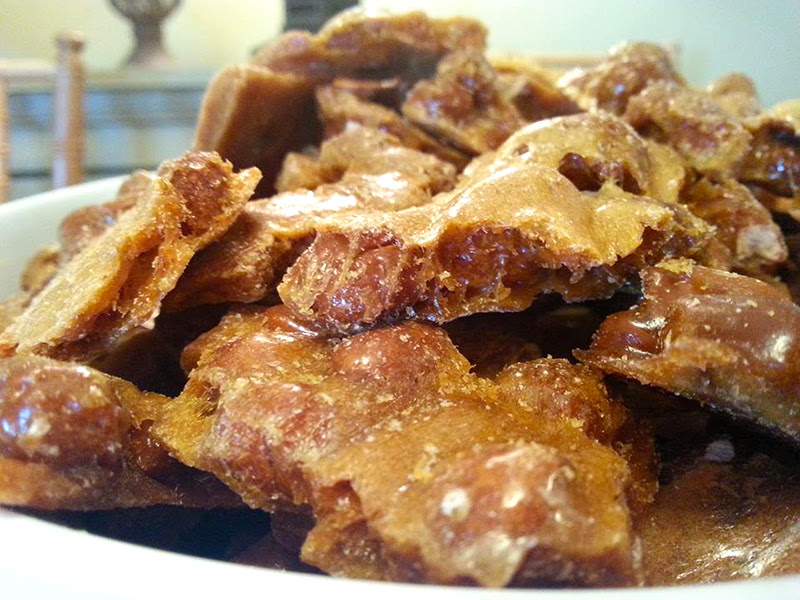 This stuff was great as soon as Charlie Frank started making it at the Candy Manufactory nearly 20 years ago. Many around here are actively admitting to having eaten a half a bag in a single sitting. What makes it so special? Cane sugar, the same Virginia Runner peanuts that are in the Zzang!® bars, and some Irish butter. “I cook the cane sugar to shades of deep gold to bring out all the flavor, and the peanuts are in there long enough to roast perfectly,” Charlie always used to tell us. That dark toasting (remember the Maillard effect) makes for a more caramelly, toasty, less sweet-tasting brittle.

The story behind peanut brittle.

The general origin story of peanut brittle is that it came from the South, and that a Southern woman in the second half of the 19th century came up with peanut brittle by accidentally putting baking soda into her taffy instead of cream of tartar. That, of course, leaves out the rest of the story. Like banjos, there’s more, by definition, to be told. Peanuts are indigenous to South America, but it seems generally agreed upon that they came here from Africa and were used to feed enslaved Africans en route to the Americas. The Portuguese had brought them to West Africa from Brazil on the return routes of slave ships. In the American South, peanuts in that era would have surely been farmed primarily by enslaved Africans—the port city of Wilmington, North Carolina (in our era, the hometown of Michael Jordan) was exporting them in the early 19th century.

The man behind the peanut.

The man who made peanuts so prominent in the U.S. was, of course, George Washington Carver. Born a slave in Missouri during the Civil War, he went on to become one of the foremost plant scientists, agronomists, and artists in American history. Carver taught at Tuskegee University (also home to Tuskegee Airman) for decades. His work is exceptional—much, much more than I can do justice to here. He was a huge promoter of peanuts and developed over 300 recipes for their use including cosmetics, shaving cream, glue . . . and a host of good things to eat. When Carver passed away in 1943, President Franklin D. Roosevelt sent this message: “All mankind are the beneficiaries of his discoveries in the field of agricultural chemistry. The things which he achieved in the face of early handicaps will for all time afford an inspiring example to youth everywhere.”

Ways to enjoy our peanut brittle.

Back to the brittle. It’s ideal for picnics because it won’t melt in the heat. A small sliver is a wonderful treat. It’s also great if you coarse chop it and toss it onto gelato. Or on savory salads. It’s a surprisingly good pairing with blue cheese. You can find the Peanut Brittle at the Candy Store, at the Deli, and the Roadhouse, and we can ship it for you anywhere in the 50 states. And the chocolate-covered version is pretty choice, too!

Check out all our goodies from Zingerman’s Candy Manufactory!

← Previous: Nachos at the Roadhouse Next: Secret #38: Thinking about Thinking →