Five Fine Ways to Use the Smoked Chicken from The Roadhouse 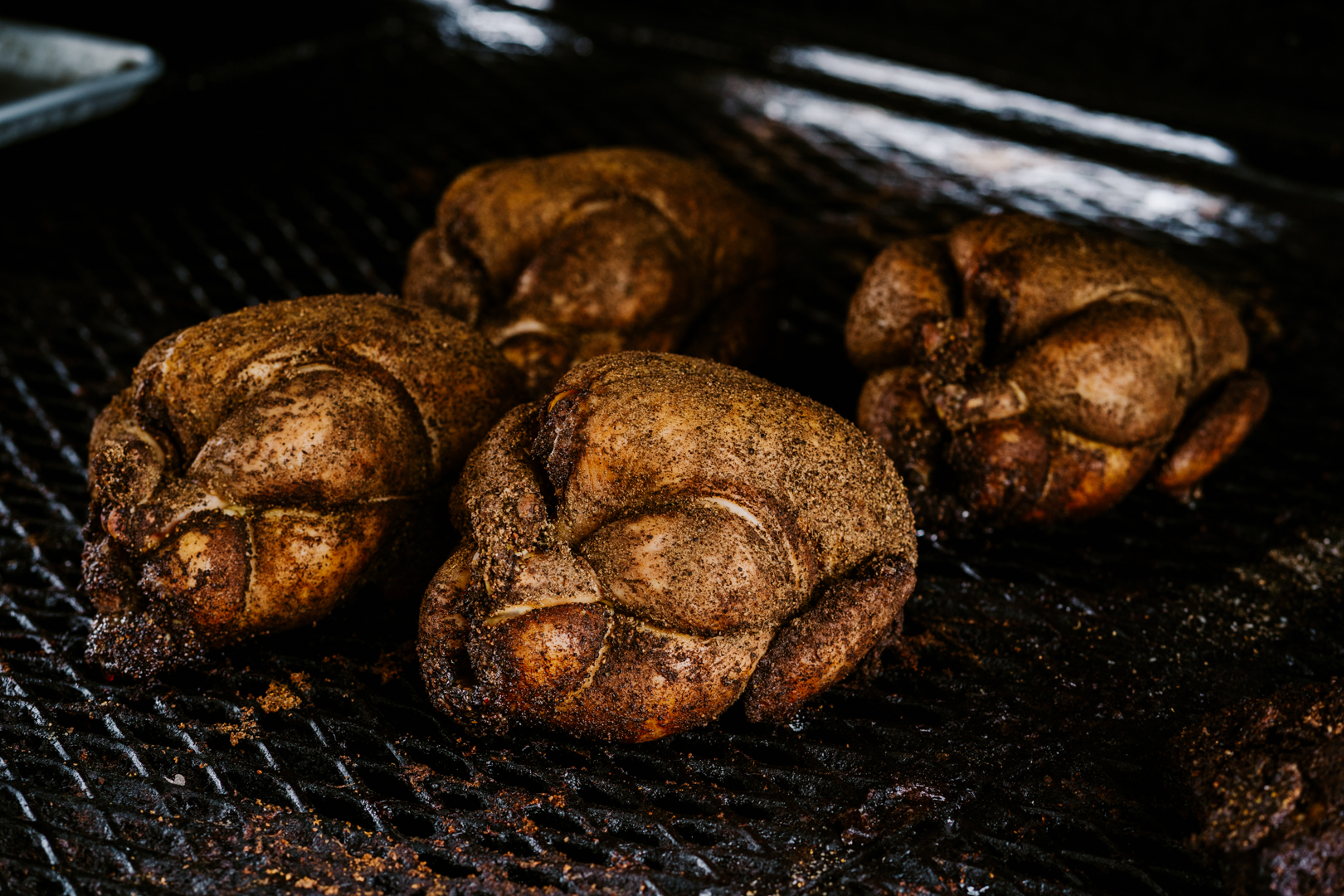 As many of you know, I’ve been kind of hooked on our whole, oak-smoked chickens from the Roadhouse. They’re too good to pass up! Rubbed with a whole bunch of freshly ground farm-to-table Tellicherry black pepper and salt, and then smoked over oak for three to four hours, they make a really great main meal for sure. Tammie and I have generally been inclined to eat them with our hands, pulling off pieces so we get a good ratio of spicy skin to smoky meat and then dipping our bites into the barbecue sauce.

Smoked chicken as an ingredient.

One of the things that draws me to them is that the chicken is an inspired ingredient in other dishes. The smoked chicken is kind of the poultry equivalent to bacon! Although it’s made to be the main meal (pick it up, unwrap, eat), this smoked chicken is so darned good as a seasoning ingredient.

Hazim Tugun, who’s worked at the Bakehouse for the last four years, has also fallen in love with these smoked chickens. Recently he wrote: “OMG… So good!” And then, the other evening, he emailed again:

That Roadhouse pit chicken deserves an award! Had it again this week, and last night with picked leftovers, I made it into a creamy kale salad. Shredded carrots and cabbage, garlic, parsley, a spoonful of the Brinery’s sauerkraut finely chopped. I made the dressing with extra virgin olive oil, yogurt, apple cider vinegar, lemon, Turkish Maras red pepper flakes, and a touch of honey. And for an extra layer of umami, Dry Jack cheese from the Cream Top Shop finely grated on the micro-zester into the whole thing.

Love as an ingredient.

As you know, though, food for me leads straight into philosophy, history, and people. And, in this case, appreciating Hazim and the insightful comments he’s shared with me over the months, it also had me thinking—along with everything else going on around us—about identity and complexity. Two things that are ever-present in the world in its natural human state. Two things that, for the last ten years, almost always call to mind Amin Maalouf and his magical little book In the Name of Identity. Maria Popova, who writes the wonderful enews “Brain Pickings,” said that Maalouf’s book is, “An immensely insightful exploration of difference, allegiance, and the underlying commonalities of the human experience, timelier than ever in our culture of divisive Otherness.” Which makes me think of many people, one of whom is surely Hazim.

Hazim hails, originally, from Cyprus. More specifically, the Turkish part of the island (where cooks use pomegranate molasses liberally—on lamb, flatbread, poultry, and more). He came to the U.S. back in 1995 to study. He went back to Cyprus to live there from 2008 to 2010, and then again with his wife and daughter from 2014 to 2016. The second time around, he was baking on his own in Cyprus. When the family came back again to the U.S. in the fall of 2016, he joined the Bakehouse. Hazim is a very skilled baker. A creative thinker. A cool guy who likes to cook. With all of that background, if one were thinking hierarchically, then would one start trying to figure out just “what” Hazim is. I’d have at it another way. Hazim is Hazim. A wonderful, one of a kind, human I feel lucky to know and to work with. I like what Maalouf writes. Rather than rank things, he says, “I haven’t got several identities: I’ve got just one, made up of many components in a mixture that is unique to me, just as other people’s identity is unique to them as individuals.” As Maalouf reminds us, “It is often the way we look at other people that imprisons them within their own narrowest allegiances. And it is also the way we look at them that may set them free.”

I think about Hazim, too, because in the context of Chilean biologist Humberto Maturana’s marvelous The Biology of Love, we are all both influencing our ecosystem and being shaped by it at the same time. And in the most positive and beautiful sort of way, Hazim epitomizes that really well. His contributions to the quality of our bread have been big. He’s played an important part in the milling of our own flour. His recipe development has been part of many of my favorite breads—most notably for me, the Country Miche. And at the same time, Hazim has been influenced by being here as well:

Zingerman’s has touched me and my loved ones in so many ways. I am becoming a better version of myself, I think. I’ve come from a background that supposes that a hard-studying, smart man will be an engineer, doctor, lawyer or an architect (and I wanted to be a marine biologist as I love the sea). Well, I became an engineer… The roots were not quite forming though; so, after years in that career, with a bit of tumultuous uprooting, I switched over to baking, where I knew my heart would be simply happier. Could I make a living, could I be that successful man that the society expected of me being a baker, but not an engineer? It took a while to get at it, to work it out within myself, but a resounding Yes is the answer. And I believe it more and more now. And it is Zingerman’s helping me find myself to be that person. Here, I am able to do my work, what I love to do, and at the same time, reflect on who and how I am, where I’ve come from and where I am going. The ecosystem is strong; I may falter here and there but there is that unmatched energy around me to help me get back on my feet and remind me of the successful future that I keep painting in my head (and we put down on paper as our visions)! I’m working at a bakery, but I am doing a lot more than just baking! I am baking, creating, teaching, learning, connecting, reflecting, leading, following…. the list goes on. I vividly remember telling Frank after my few months, “I am not sure if this is intellectually satisfying enough for me”… Huh! Little did I know…. 🙂 I just needed to be open and embrace the culture, accept the new soil I was in.

Inspiring ways to use smoked chicken.

And now let’s come back to that fantastic smoked chicken that both Hazim and I have fallen for. Here are some other great things to do with it:

Cook up some of the Mahjoub family’s fantastic organic, sun-dried, hand-rolled Tunisian couscous. Sauté some chopped vegetables—onion, carrots, fennel, peppers, etc. When the couscous is done, add bits of the smoked chicken and sautéed vegetables, mix well, and add salt and pepper to taste. Drizzle with a bit of that pomegranate molasses and maybe a sprinkle of sumac too.

Pull off big pieces of the smoked chicken. Toast two slices of our Bakehouse Country Miche. Spread the toast with mayo, then top with the chicken. Put on some ripe avocado along with lettuce, tomato, salt, and pepper. If you want to gild the lily, add some bacon.

There are a thousand ways to work this one. One I tried this week was to make a dressing of yogurt and pomegranate molasses. Toss with the chicken and some toasted walnuts. Wonderful. The other is just a nice mix of chopped celery, minced onion, and chopped parsley.

In honor of Hazim’s baking work, pop some small pieces of the smoked chicken on your next pizza. We’re selling our very own super good pizza dough at the Bakehouse and Cream Top Shop.