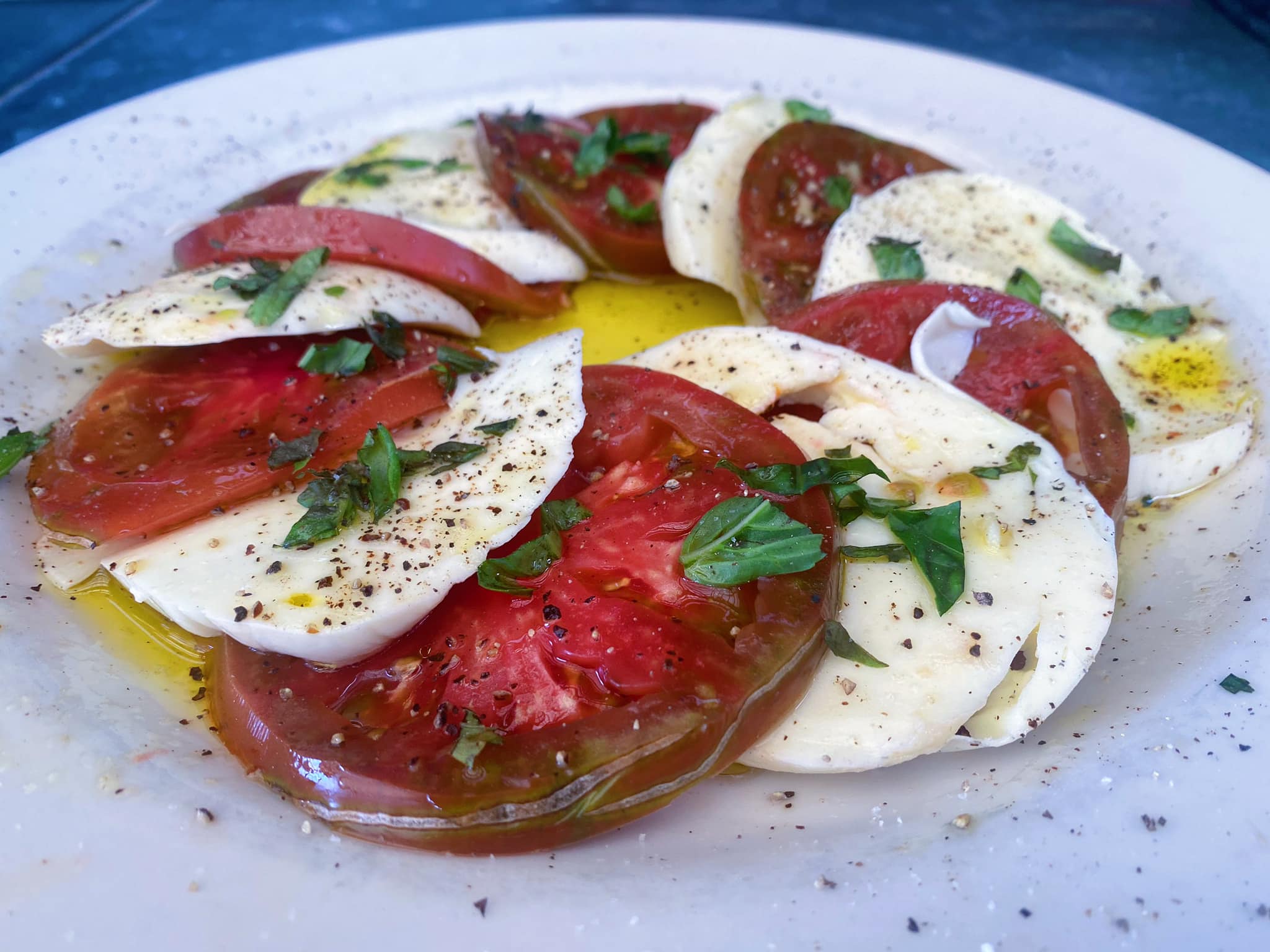 At the Roadhouse or your house.

Given that we live where the tomato season is so short, it’s hard to pass up any opportunity to eat them. A lot. The Insalata Caprese is one of my favorites. Fresh mozzarella (which I can get daily at the Cream Top Shop and the Deli), slices of ripe tomato, fresh basil, sea salt, great black pepper and world class olive oil come together in under ten minutes to make one of the most marvelous meals we’ll get.

The story behind Insalata Caprese.

While Insalata Caprese might sound like a timeless classic that should have been eaten in ancient Rome, the reality is that it’s relatively new. (Same with the pasta dish above—tomatoes and peppers didn’t come to Europe until about 1500 and we’re even eaten until a few hundred years ago. In the context of reframing what is, or is not, weed, tomatoes were long believed to be poisonous!) Most culinary historians set the salads origins in the early 20th century—the red, white and green on the plate replicate the colors of the Italian flag and Italy as a country is only 160 years old. (It was formally founded on March 17, 1861.) The Caprese salad, as you would expect, likely started on the Adriatic island of the same name. The dish theoretically gained fame when King Farouk of Egypt—known for his jet-setting ways—spent time on Capri. One day in the sun he asked for a light lunch, he got this salad and loved it so much it turned into his cause celébré.

Why our Caprese is so good!

I have no royal background and I’m not from Italy, but I sure do love eating this. I know I’m not alone because this time of year the Roadhouse serves dozens of them every day. Heirloom tomatoes are coming in from Tamchop Farm, We the People and Green Things; mozzarella gets made by hand at the Creamery; fresh basil is picked each day from what the Roadhouse crew refers to as Out Front Farms. Come by this week, order a Caprese Salad at the Roadshow and go eat it at the picnic tables in what we’ve now taken to calling Roadhouse Park. As of this week we can serve you beer, wine or cocktails out there so your evening’s enjoyment can be complete!!

Find the Caprese and other awesome specials on our menu!

← Previous: The Art of Kind-zen Next: Cheers to the Roadhouse Park! →