Ribeye Steak with Tarragon Butter at the Roadhouse 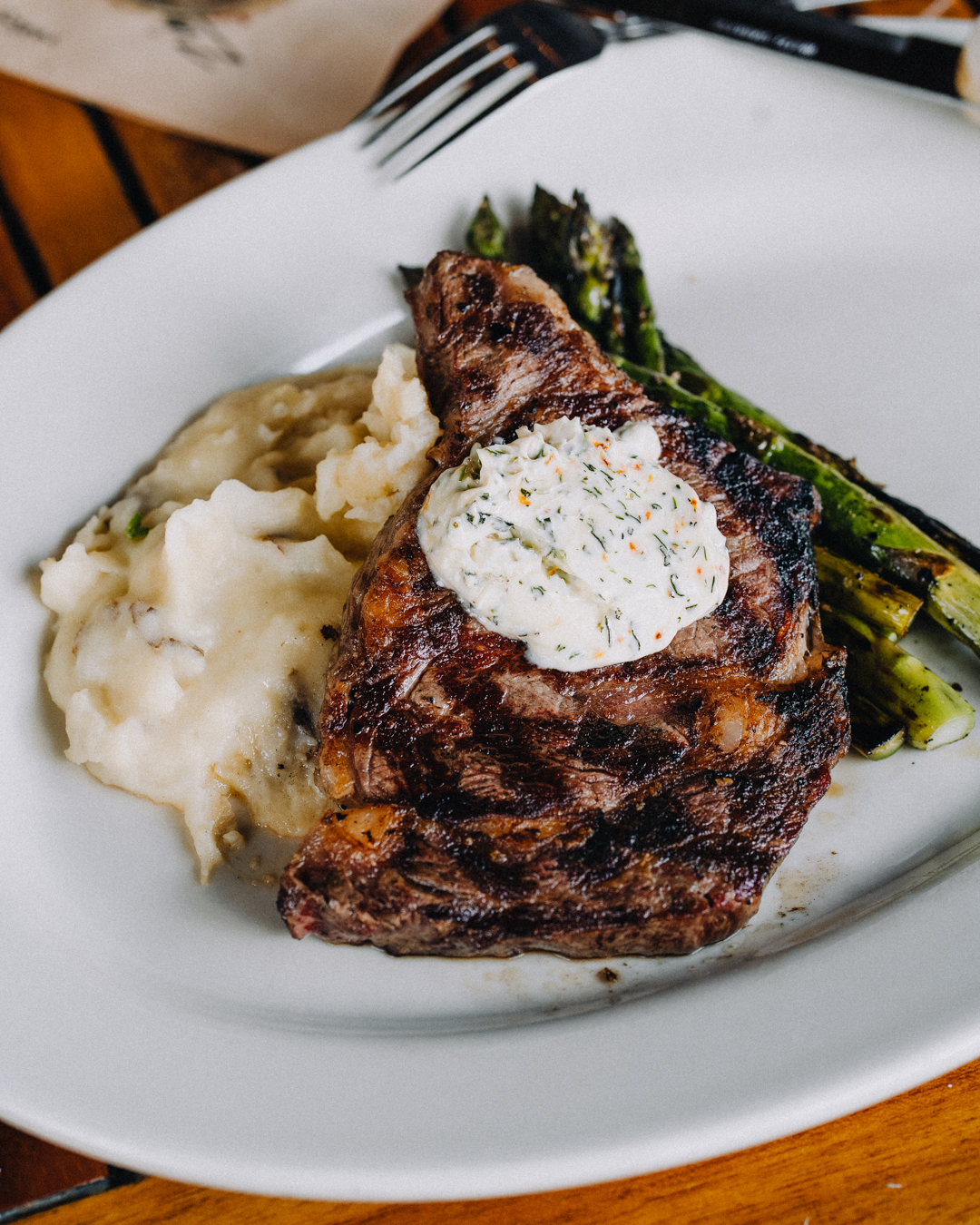 The best foods for me are, much more often than not, surprisingly simple. A few really great ingredients that come together to make something remarkable. These two spring specials on the Roadhouse menu clearly qualify! They’re both variations on this theme, the common connection being the terrific fresh-tarragon butter that head chef Bob Bennett put together this past week.

What makes these specials special.

The first is the Roadhouse ribeye steak, marinated in extra virgin olive oil, grilled over oak, and topped with a beautiful pat of the tarragon butter. The steak is cut in the back kitchen from whole sides of beef that have been dried-aged for about four weeks. The steers are pasture-raised all the way through (none of that common commercial finish on a huge amount of grain).

If you’re more inclined to vegetables, like I am, the Roadhouse kitchen crew are offering the same tarragon butter on a main course plate of local asparagus that is first blanched, then grilled over the same Michigan whole oak logs. The asparagus is coming from two local family owned farms—Prochaska and Goetz.

Both plates come with the splendid organic heirloom Carolina Gold Rice we get from Anson Mills. I would grind on a twist of some of the terrific Tellicherry pepper that comes from a small family in the Kerala region of southwest India that we put into the grinders that are on the tables at the Roadhouse. Seriously, these are both marvelous meals.

In either case, that lovely, herbaceous, tarragon butter melting atop the hot-off-the-grill beef or asparagus is something special. Order a couple of buttermilk biscuits on the side and dip the corner of one into the bits of butter that drip onto the plate.

All about The tarragon butter.

I’m particularly jazzed about the presence of the tarragon butter. It turns out that both Bob and I have a high affinity for what in France is often called the “King of Herbs.” I love it. Its cultivation in Europe dates only to the late 1500s when it came to England from Siberia. It arrived in the U.S. in the early years of the 19th century. Tarragon is usually described as being licorice-like, but it’s also beautifully buttery, aromatic, and lively with a bit of that “fresh cut grass” thing that one often gets from new harvest olive oils. Equally, I’m stuck on the aroma. And although by name and fame it’s way familiar to every cook, I think few folks in the States use tarragon very often.

In Italian, tarragon is known as dragoncello (one of my favorite food words), from il dragone, meaning, “the dragon.” The name could, alternatively, come from the Arabic, “tarkhum” which also means “little dragon.” In either case the name is derived from the dragon-like appearance of tarragon’s roots and leaves. During the Middle Ages there was a belief known as the Doctrine of Signatures, which held that an herb’s appearance dictated its best use in medicine. Because of its appearance, tarragon was supposed to cure the bites of snakes, “venomous beasts, mad dogs,” and of course dragons. A good thing to know in case, as could happen, dragons start appearing in abundance in Ann Arbor. You might think it unlikely, but then, who would have foretold how the last few years have played out back in 2019?

← Previous: Fried Cheese Curds on Wednesdays Next: Fresh Whitefish at the Roadhouse →