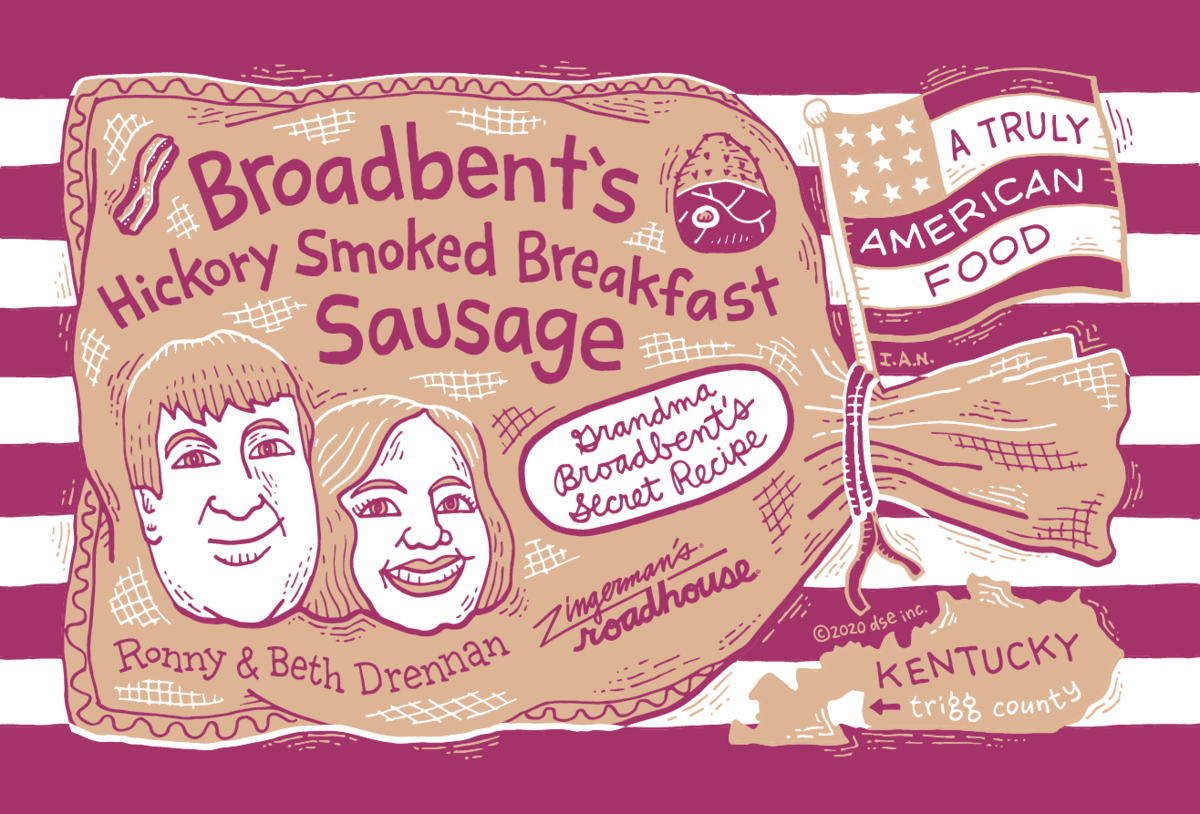 Super tasty smoked pork made by Broadbent since 1909.

We’ve been working with Ronnie and Beth Drennan down in Cadiz, Kentucky for well over two decades now. They’re super nice people who continue to honor the tradition of their region. I love their dry-cured, hickory-smoked bacon and long cured country ham, both of which we have at the Deli regularly. Their smoked sausage is also particularly special. If you haven’t had it yet, and you like a nice bit of pork with your eggs in the morning, swing by and order the Broadbent sausage with your breakfast at the Roadhouse. Or drop by the Deli or Zingermans.com to buy some to cook up at your house! The aroma, the flavor, and the story behind it all are pretty special stuff!

What the Drennan’s make at Broadbent is a very particular style of sausage that, as far as I know, is unique to Western Kentucky. The Drennans grew up in the area and bought the little ham, bacon, and sausage company from Smith Broadbent, III. The sausage recipe was developed by his grandmother, Anna “Grandma” Broadbent, who started selling it from the family back in 1909. To make the sausage today, in 2022, the Drennans follow the same recipe she was using then. They mix a batch of fresh pork—about two-thirds lean pork trimmings and a third fat pork trimmings—with sage and red pepper. They grind that, let it set up in the cooler overnight, then regrind it finer, and stuff it into cloth bags that hold about a pound or so of sausage. The bags are hung to air dry and cure up for a week, then smoked—in the bag—over green hickory for 24 hours. The sausage is shipped, stored, and sold in its cloth “coat.” It lasts for a long, long time so if you buy a whole “stick” of sausage, there’s no rush to use it up overnight.

The use of cloth bags is, as far as I know, unique to this part of the Middle South. Writer and historian, the late John Edgerton’s theory was that “Sausage had special appeal because it could be eaten fresh or smoked, mild or spiced with seasonings such as sage and pepper. But how to store it? No such thing as plastic, and paper was too fragile. What about cloth? Muslin? It was the cheapest and most common material for making clothing and also made good sacks that ‘breathed’ air and ‘sweated’ grease.”

How to enjoy Broadbent sausage.

What do you do with the Broadbent smoked sausage? Ronnie Drennan says he “just eats it,” usually for breakfast with eggs and biscuits. I add it to omelets. Or, Beth added, “use it like lard and cook things in it. I want to cook French toast in it.” And you can certainly use some to make sausage gravy at home for a Sunday brunch. It’s great on one of those really fine buttermilk biscuits at the Roadhouse. And you can just fry it up for breakfast, lunch, or dinner with all about anything else you feel like eating. Your kitchen will smell great, and your taste buds will be happily tickled!

← Previous: Cooking Pasta in Broth at Home to Push Past the Cold Weather Next: Lemon Chess Pie from the Bakehouse →