Lemon Chess Pie from the Bakehouse 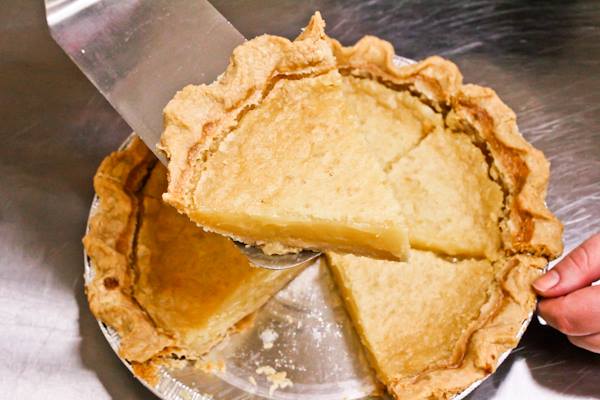 A slice of brightness in the depths of winter.

Here in the depths of winter, I like to look for any bit of brightness I can find—the Lemon Chess Pie from the Bakehouse qualifies big time! Its sunny yellow appearance on the table certainly brings a smile to my face. Tart and lively in flavor, it’s made with a bunch of fresh lemon juice, a generous dose of fresh lemon zest, and a small bit of local buttermilk, all baked into a handmade butter crust. The Lemon Chess Pie is lovely just as it is, at room temperature. If you want to embellish its excellence, add a bit of fresh whipped cream, or, serve it with a spoonful of good jam on the side. I’m partial to the tart Black-and-Blueberry Spoon Fruit we get from our friends at American Spoon Foods. And it’s tasty with a good strawberry jam too—a confectionery version of strawberry lemonade!

The history of chess pie.

The origin of the name “chess pie” is the subject of a good deal of debate amongst southern food historians. The three main theories I’ve heard are that, a) “chess” was a variant of “cheese,” the latter being a term often used instead of “curd” as in the lemon curd used for a lemon meringue pie; b) “chess pie” came from “pie chest,” the place where pies were stored; or c) a husband asked his wife what kind of pie she had made and the woman answered, “It’s jess pie, honey.” And “jess” later became “chess.” None of them seem particularly great to me but there you have it.

There are early recipes for what was essentially a “lemon curd” pie in the English author Hannah Glasse’s The Art of Cookery Made Plain and Easy from 1747. In a more modern American context, the first printed recipe here came out in a cookbook from Fort Worth Women’s Club in 1928. Writer John Egerton—one of the founders of the Southern Foodways Alliance—says that the recipe didn’t show up in many American cookbooks until the 20th century. “There was transparent pie and jelly pie … but the modern version of chess is rarely found in old recipe books.” Still, its ancestors seem to have been around a long time—chess pie falls into the same family of early American pies that were basically sugar syrups of some sort baked into a pastry shell. Usually, the filling relied on some combination of eggs, butter, and sugar. Up in Quebec, they make one with maple, and in colonial times, vinegar was often used to make “vinegar pie,” which I wrote about in Zingerman’s Guide to Good Eating.

If you’re up for something bright, sweet, and exceptionally tasty, swing by the Bakehouse, the Deli, or the Roadhouse! And remember, pie is perfect for breakfast!!

← Previous: A Very Special Smoked Sausage from Trigg County Kentucky Next: MI Corazon: A Terrific New Cocktail at the Roadhouse →