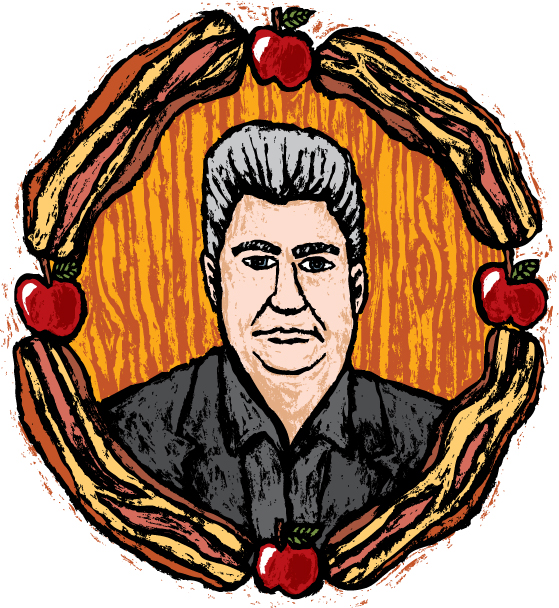 Nueske’s bacon is hardly new news around here. Since we’ve been using it extensively for over 25 years now it’s probably one of the best known products in the ZCoB. But it came up about ten times this weekend and I figured the food fates were telling me something so . . . here it is.

The bacon came up because we had the special bake of Peppered Bacon Farm bread this weekend. Since the special bake is over with, I apologize for even bringing it up. If you haven’t had the bread, it’s worth the wait. Pretty much everyone I’ve talked to seems to love it. I’ve used it for toast, heating it up to eat with dinner . . . hard to go wrong on any count really. I’ve done it toasted for a fried egg sandwich, which was great. And I’m thinking it’d be great for an egg salad sandwich. And if you happen to have any bits and pieces of the bread lying around, it makes great croutons too.

With the bacon bread already in mind I went by Radio Free Bacon on the patio at the Roadhouse Sunday afternoon and since Nueske’s is a sponsor the bacon was there too. They were demoing and sampling the bacon, winning more fans for something that everyone seems to love. And then Kevin came out from the bar with his first draft of a BLT cocktail—Tito’s vodka, our homemade bloody Mary mix and a bit of pureed lettuce with of course, a slice of bacon. More work to be done but stay tuned . . . it’s gonna be good!

About half an hour later I had a woman stop me to tell me that she’d been in the RH a year or so ago and that I’d given her a taste of the Nueske’s bacon. I’m not sure exactly where she lives but that’s ok—it’s her comments that are of note. Apparently she’s been thinking of it ever since. Last night she came in with her dad (retired but moved back from Florida because he just didn’t like it down there) and wanted to get something with the Nueske’s on it. They went for a 24/7 burger (Nueske’s bacon—smoked for 24 hours—and Hook’s 7-year old Wisconsin cheddar) and loved it.

All of which was followed up this morning by about five different people eating breakfast at the Deli and seeing the applewood bacon appearing in every one of their meals—breakfast BLTs, bacon and eggs, etc. And in the spirit of “everything’s better with bacon” they all looked very happy.

Anyways, if you somehow aren’t particularly familiar with Nueske’s bacon . . . the late political and food writer R.W. “Johnny” Apple wrote in the NY Times, that Nueske’s was, “the beluga of bacon, the Rolls-Royce of rashers.” As he usually was, Johnny Apple was right on. Pretty much everyone loves this bacon, from kids to connoisseurs.

In terms of the family a fair few of you have met Tanya Nueske, but if you haven’t had the pleasure I’ll just say here that she’s about as passionate about her product as you’re going to get. In buying from them for over two decades they’ve consistently been a great supplier—they’re generous with samples and support, they’ve supported all the promotional work we do, their product has been consistently excellent. And I appreciate that!

Anyways, Tanya’s grandfather started up selling the bacon in 1933. He started out smoking over applewood, using techniques that he’d learned from his grandparents. Not surprisingly, the family starts out with higher quality hogs—primarily a cross of Yorkshire, Hampshire, Landrace and Berkshire. The hogs are fed a much bigger percentage of barley and corn by comparison to most. They still hand trim everything. The Nueske’s cure the fresh slabs of bacon in brine for at least 24 hours, then hang the pork for another day to dry, then finally send them into the smoker them for another 24 hours.

The finished bacon is sweet, smoky, rich without being overwhelming. It’s kind of candy for bacon lovers I guess. Good stuff, the sort of thing you could eat a whole lot of if you let yourself get going. Its flavor is meaty, subtly sweet, big without being obtrusive, compelling in the way that makes you want to eat another slice not long after you’ve finished the first one.

Fortunately we have about fifty ways to do that, from sandwiches at the Deli, Bakeshop and Roadhouse to salads (check it on the Deli’s ZCobb salad along with hard cooked eggs (organic ones from Grazing Fields), blue cheese from Great Hill in Massachusetts, Amish chicken, avocado and more on a bed of chopped local lettuces. And of course, as Darin is wont to remind us so appropriately, everything is better with bacon so feel free to put it on most anything you’re cooking.