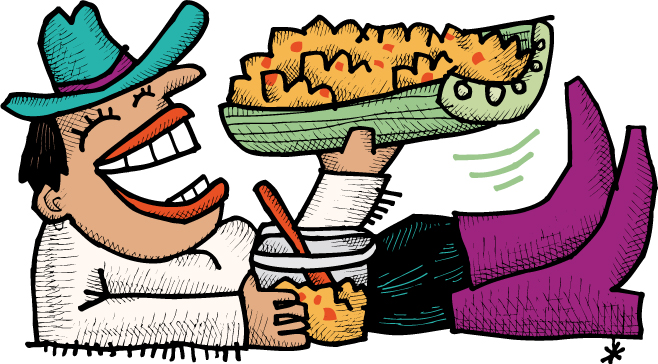 I hardly even know where to start on this one. Pimento cheese has been pretty much the surprise of the year for me. Like the horse races in the spring it was sort of a triple crown of surprises: first, I was surprised by what it was; second, by how passionate people down South are about it; and third, by how quickly non-Southerners have embraced it here in Ann Arbor.

I guess the place to begin is how my ignorance of pimento cheese almost got me kicked out of the Southern Foodways Alliance conference last fall. In one of those really-stupid-but-you-didn’t-know-it-was-stupid-or-you-wouldn’t-have-said-it moments, I let slip a derogatory comment about pimento cheese in public. Hey, what I did I know? I’d never actually had pimento cheese. And in my ignorance, I assumed that pimento cheese like the pimento loaf stuff that they sell in the deli cases of mass-market grocery stores. You know pasteurized, processed cheese that no one that’s into full flavored food would want to eat.

The first person that called me out on my food faux pas was Kristen Hindes, a regional cheese manager with Whole Foods, who’s lived much of her life in Atlanta. When she heard me slough off pimento cheese she gave me a look of horror, as if I’d just made some sort of terrible racial slur. I can’t remember exactly what I said to her in response to that look, but it was probably something along the lines of, “Well you don’t really eat that stuff, do you?”

I was shocked to hear a loud, “Of course we eat pimento cheese. What are you talking about? It’s the best!” At first I thought maybe it was just an emotional thing that Kristen had for this stuff – I come across people who have soft spots Twinkies and Fruit Loops and I figured this was just another case of childhood bonding to an otherwise uninteresting food. Man was I wrong. Totally, completely radically off base. Pimento cheese is neither fad nor faux. It’s very real American food with a very long history, and, in all seriousness, it makes for some really good eating.

I guess before we go any farther here, I should back up a bit here and tell my fellow Yankees who don’t know from pimento cheese just what it is. It’s a blend of grated cheese (usually cheddar) with mayonnaise (though some folks use Miracle Whip), chopped pimentos, and spices. If you’re starting to make a face, save yourself the embarrassment I put myself through because, honestly, good pimento cheese is really, really good. To help acculturate those who aren’t of Southern origin, I should say too that most folks who speak southern don’t pronounce it quite like it looks. It’s more along the lines of “pimenah” (pardon my poor phonetics); others call it “menta” cheese, and some simply say “PC.” I’m sure there are about a thousand regional variations I haven’t yet-but hope to soon-heard.

Thanks to the Southern Foodways Alliance there actually is a book-“Pimento Cheese Invitational, 2003.” Lest you have any doubt of the seriousness of the subject, the book has over two hundred pages of recipes and very personal remembrances about pimento cheese. According to Kendra Myers, writing in the “Pimento Cheese Invitational,” it’s been a big deal in the South since the early years of the 20th century, featured in Southern groceries since 1915. The poverty of the Depression years made it even more of a hit. And it’s apparently continued to grow in popularity ever since. What do you do with it? Might as well just quote Kendra Myers again: “… it’s easy to make, it’s cheap and it tastes great. It doesn’t make white bread go soggy, and it keeps well. It’s good between two slices of bread, lining a rib of celery, packed into a cherry tomato, or perched on a cracker. It’s heaven on a hamburger or a hot dog. Or eaten with a spoon right out of the crock.”

It turns out that it’s not just Southerners who seem to like it. I made my first batch at home and brought it in the Roadhouse where I rather tentatively gave tastes to the first ten staff members who came by. Shockingly I got nearly unanimous praise-they loved it (and let me tell you the odds of everyone liking any new thing we introduce the first time through are next to nil, so getting this much early support was akin to hitting a home run in your first major league at bat.)

With that much support I decided to venture out in public with pimento cheese and put it on the specials list at the Roadhouse. That’s no small thing for me because everything I’d learned about told me that pimento cheese is just the sort of homemade, nearly ubiquitous food that I’m always kind of afraid to do-since everyone grew up with it everyone’s going to have a radically different version in their head of what it should be like (it’s akin to having 50 Jewish people over and hoping they all like your chopped liver.) So far, knock on wood, the response has been consistently good to great. One guy told me it was almost as good as his mother’s (that’s about as good as it gets I think.) Another, from Missouri told me it was the real thing. A third from Mississippi said it was great, “like a redneck endorsement!” One older customer who grew up in the Depression in Arkansas grabbed me at the Roadhouse and said firmly, “Congratulations!” “For what?” I asked. “Pimento cheese,” she answered, a bit of her Southern accent still coming through even after many decades of living in Ann Arbor. “It’s better than what I grew up on,” she said very seriously. I later gave Nancy Eubanks some of my early test batch to taste. Her response was, “Oh my God! Too good! Paris, Texas (her hometown) would be proud!”

Last winter I was down in Columbia, South Carolina to visit Anson Mills (where we get those amazing grits and Carolina Gold rice from). I ate my first pimento cheese burger there. (Note, by the way, that it’s a “pimento cheese burger,” not a “pimento cheeseburger.” Or in Columbia where they call ’em “pienot burgers.”) The burger wasn’t bad but the idea of it was clearly great. As soon as I had two bites I knew that it would be even better if we made it with better beef (that fresh ground Niman Ranch chuck is hard to beat) and better cheese (aged Vermont cheddar from Grafton Village). Having put pimento cheese burgers on as a special over the last few months, I can tell you that they’ve been an almost overnight hit. To quote John T. Edge (who some of you met when he was at the Roadhouse last March as part of a special dinner we did featuring his “Fried Chicken” book) from his soon-to-be-released book “Hamburgers and Fries,” a pimento cheese burger is, “… a molten stack of meat and goo. It’s also delicious.” No question that he’s right. I think it’s safe to say that they’ll be on the next menu. For the moment feel free to ask for one any time. If we’ve got the cheese, you can have the burger!

In the ten months since I my first faux pas at that conference down in Mississippi, I’ve come to the conclusion that pimento cheese is really a bigger thing in the Southern psyche than barbecue. That’s right. This cheese spread is actually a more important piece of everyday Southern culture than its much beloved barbecue (which, please don’t let me get into trouble again, is also an extremely big deal and very, very good!) Hardly anyone does whole hog barbecue at home any more except on very special occasions. Pimento cheese, on the other hand, is well within everyone’s budget, both timewise and costwise. You can feed two or two hundred. To quote Melissa Booth Hall, “Pimento cheese . . . is not so much the food of special occasions as it is the stuff of everyday life.” Real people eat it, they eat it a lot, they love it.

In that sense, I realize pimento cheese is very much what John T. Edge would might call an “iconic American food.” It’s truly unique to this country. It’s not a fad. It’s not phony. And because it actually tastes good as well as carries high emotional attachment, it is very much the sort of full flavored traditional food that we focus on here at Zingerman’s. And it’s totally the kind of really good American food that running the Roadhouse has pushed us to discover, deliver and teach about. Pimento cheese, like so much of what we serve, is fun, culturally complex, historically intriguing and good to eat all at once-I do really love my job.

By this point in the conversation you’re either as surprised as I was that there’s this much to say on the subject. Or you’re surprised that anything I’ve written wasn’t already incredibly obvious to me. Or you’re ready to send me your recipe and set me straight on the true pimento cheese path. In any case, thanks for reading. Thanks to Kristen Hindes and everyone else who has helped me learn American culinary history in such an engaging way. And thanks in advance to those who know much more than I do and have eaten much more pimento cheese than I have. Here’s to many more flavorful culinary surprises to come!