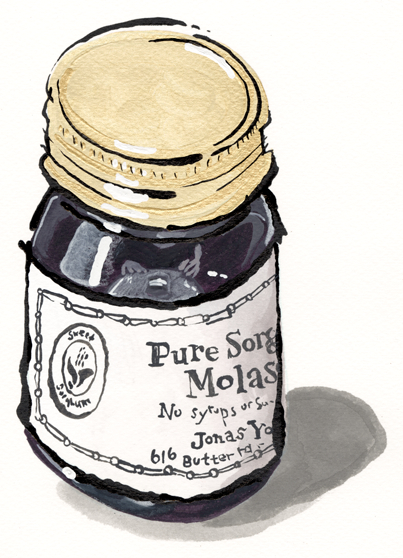 The Maple Syrup of the Upper South

This October, I’m going to speak at the annual Southern Foodways Alliance symposium in Oxford, Mississippi, about the state of Southern food and why it seems to be so special. I’m not sure yet what I’m going to say, but one of the things that’s starting to dawn on me is that it’s not just that Southern food is really good; it’s that Southerners are way more poetic and emotional about their eating than many other people in the country are. It’s a part of Southern culture, and Southerners are proud of their culture and willing to talk about it in ways that folks from other parts of the country seem to skim over. Which brings me to a small, but sweetly delicious footnote of Southern eating—sorghum syrup.

My thoughts about sorghum syrup starts with a black and white photo of Mrs. Burnett Brooks in Foxfire, the amazing book of Appalachian folkways published in the 1970s. She’s probably in her 70s, though mountain folk who’ve worked hard physically their whole lives can often appear older than they really are by modern urban standards. Broad, slightly rounded shoulders. Strong looking arms. Both fists clutching a sorghum skimmer that she holds diagonally across her chest the way a medieval knight might hold some sort of long handled axe. The skimmer itself is a flat, perforated plate as big as her head, and nailed to a long wooden pole. Mrs. Brooks is all dressed up in a white button-down shirt and a white apron, wearing the very serious look of someone who’s been asked to pose for a photo in a time and place that people didn’t pose for photos taken with cell phones every fifteen minutes. In truth, she looks rather dark and dour but for whatever reason I’m sure that underneath that posed-for-the-Foxfire-photo appearance she was actually a very sweet woman, rich with a history, lore and lots of good cooking and eating in her past and present. That’s, to me, the setting in which to assess sorghum syrup.

The sorghum is ready each autumn when the seeds at the top of its stalks turn red. The stalks are stripped of the leaves (which are used for silage), the seeds are saved for next year’s plantings, and the stalks go through a mill to make the juice. The liquid comes out green, which explains the intriguing greenish cast that you can still sense in the otherwise finished dark brown syrup. It takes about four hours of boiling to get the juice cooked down to the right consistency. In the early stages, a natural scum forms on the top, which is skimmed (as per Mrs. Brooks’ skimmer above) and tossed on the ground. (Foxfire reports that, “Usually the dogs get to the skimmings before they are covered and really enjoy this treat.” Southerners do seem to love stories about dogs almost as much as food. Read one of my favorite books, Hunter’s Horn by Harriet Arnow, for more on dogs, sorghum and the upper South.)

Down South, they generally refer to the syrup as “sorghum molasses,” or just shorten it down to “molasses.” The latter had me confused for a long time because I didn’t realize that folks were referring to a wholly different product than the sugar cane molasses that I was familiar with. Compared to the latter, sorghum syrup is a bit lighter and brighter with a lovingly sourish hook to it that you might not even notice if I didn’t mention it. It’s primarily a crop of the upper South; Kentucky and Tennessee make the most. Production was much higher a hundred fifty years ago when locals relied on sorghum molasses for their every day eating. Back then, sugar was very costly, so other than honey, sorghum molasses was what you had to work with. In the hills, folks seem to have used it for most everything, including a considerable amount of moonshine.

I guess in part the name sorghum seems a bit off-putting. It’s hardly glamorous. And compared to the light golden majesty of maple syrup up here in the upper Midwest, sorghum syrup is dark and rather mysterious looking, kind of uninviting actually to the uninitiated. But underneath that surface level stuff, sorghum syrup is sweet and rich and something you might want to seriously consider getting into your regular eating routines.

Probably the most popular way to just eat sorghum syrup is to put it on biscuits. Former Governor of Georgia Zell Miller, who grew up on sorghum, says in Joe Dabney’s superb book, Smokehouse Ham, Spoon Bread and Scuppernong Wine that you start by putting a good bit of butter on a warm plate, then pour on the syrup, then mix with a fork till the mixture looks a lot like cake batter. Then you drizzle the mixture over pancakes or biscuits, or corn bread. In Memphis, they taught me to just pour the sorghum straight onto the biscuits. Either is good, so try both of them out for yourself. It’s excellent over ice cream, on French toast, pancakes or really just about anything else you’d use maple syrup for. Or just have a spoonful or two and think of Mrs. Brooks when you do!