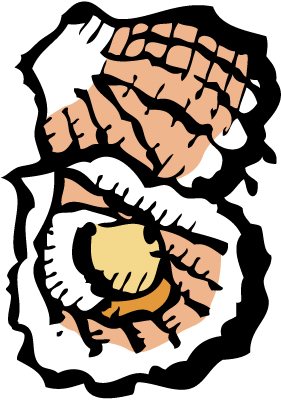 While we’ve never really called them out as a headline act, scallops are actually one of the most steadily popular dinners at the Roadhouse—it’s one of those dishes that people come back for over and over again, quietly but consistently eating and enjoying and remarking about how much better these scallops are than what they’re used to finding. Although they’re probably an afterthought to most Midwesterners, there’s no question that scallops are a big part of New England eating, right up there with clams, oysters, fresh fish and lobsters. If you head that way you’ll see—and I hope, eat—lots of them. If you do go, remember when you place your order that in New England the word is pronounced to rhyme with “dollop.”

Although we don’t see them in their shells out here in the Midwest (you have to go to the Coast) scallops are one of the most plentiful and popular of New England seafood. If you do want to go scalloping here’s Cap’n Phil’s advice: “A very handy scoop may be improvised by lashing a French fry basket to the handle of a broom, or you may simply rig a piece of netting on our quahog scratcher. Scallops lie on the surface of the sand or mud in shallow water, or in very neat, little depressions made by flapping their shells. All sorts of esoteric equipment maybe added. Polarized glasses, glass-bottomed looking boxes, floating baskets, and such, but they’re not essential.” If you just want to eat them, come by the Roadhouse and order up.

One of the big, if little discussed, “secrets” to scallop quality is that most commercial versions these days are chemically treated to help them retain—in some cases even gain—moisture. Much as water added ham has become the commercial norm (reducing costs, prices and flavor across the board) so too treated scallops are what most people have been served. By contrast we only offer have what are known in the trade as “dry-pack” scallops—no treating allowed—and we work with a long time supplier to bring only the top of the catch—the freshest scallops we can get. There really is a huge difference, which would explain why we’ve developed so many loyal fans for these over the years.

While the cooks at the Roadhouse will do up an order of scallops up any way you like, personally I go for em done in a hot sauté pan, so that they outside gets slightly caramelized and the inside stays nice and tender and sweetly succulent—succulent is really a good word for great scallops. The outside sears just a touch and the meat in the middle is still really moist and tender and they taste of the sea. I should share too though that the above-mentioned character, Cap’n Phil Schwind, also turned me on to what is actually a great way to prepare them (one that we’re happy to do at the Roadhouse). Of course he had his right on deck when the scallops were being gathered, an opportunity I haven’t yet had. But anyways, he says the “proper” way to prepare scallops is to cook them in hot bacon fat, then sprinkle crisp bits of bacon over top. He says you should accompany that dish with, “. . . hot, black coffee so strong you dare not stir it for fear it will take the plating off the spoon.” I’m not convinced that our coffee is at that level of intensity, though I suspect that, not eating them as he did right on the boat, you might actually opt for a nice glass of wine instead.