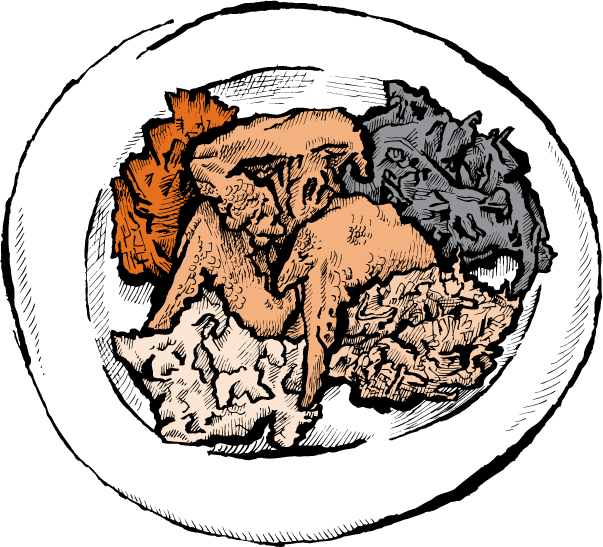 In what I’ve come to realize is pretty much a lifelong exploration of this country’s traditional barbecue styles at the RH, I wanted to let you all know that there’s a pair of really good ones on the specials list this week through Thursday. Both have been really well received so I wouldn’t be shocked to see them making more appearances down the road. But for the moment you have a few days to get over there and take a taste of two of the lesser known American barbecue traditions.

To state what most of you, and certainly, most everyone in the South, already knows, barbecue isn’t just something to eat—it’s tied to region, to family, to tradition, to politics, to people. Just the other morning I met a customer at the Deli who hails originally from Chapel Hill (North Carolina). She lives now in Birmingham (Michigan, not Alabama) and had only been up to the Deli once before. She was lamenting how she can’t find real eastern Carolina barbecue. To say what you already know she hadn’t been to the RH yet so I steered her that way and I’m hoping that we were able to make her day by serving up the real thing. For the people who grew up with it, barbecue is a big deal!

Our conversation reminded me how far we’ve come here in bringing the at first “where’s-the-sauce?” strangeness of Eastern North Carolina barbecue to Ann Arbor. Thinking back to how when we first got going there in the fall of ’03 almost NOONE here really knew what it was. But now that we’ve spent five years working at it, a whole lot of folks are on board, whether they actually come from the Carolinas or not. I guess this is not much different from all the work to familiarize folks with better bread, real bagels, artisan cheese and all the other good stuff we produce and sell. It’s rarely a short-term project but when the food tastes good and we help guests to understand it . . .

All of which leads me to the South Carolina mustard barbecue that’s on the specials list at the RH this week. I actually don’t have humungous amounts of great info to give you about the history of the mustard sauce. In part I write this stuff to see what others will tell me so if you have someone you know who’s got some good info by all means send ‘em my way. While most everyone in the Carolinas will have heard of, and probably tasted, the mustard sauce, it isn’t even really served all over the state. It’s primarily in the center of the state that they seem to swear by mustard sauce. For people there it’s the norm. Heather Showman, who just started serving at the RH and who grew up in Columbia, SC, was very happy to see it on the specials list. For her mustard sauce was just the way it was. “I think I was fifteen before I realized barbecue could come in any other color,” she told me the other night.

South Carolina is seemingly the most diverse of barbecue states (though I’m sure someone out there’s going to argue this one so . . .). If you go to http://carolinaqcup.com/ at the bottom of the page you’ll find a nice little colored map showing where the various styles are still found in the state. Mustard, like I said, is mainly in the middle. In the northeastern part of the state they seem to eat mostly vinegar sauce akin to the Eastern North Carolina style we already do. In the northwest it’s tomato vinegar akin to the way it’s done in western North Carolina. In the south down by the Georgia border they opt for a thicker tomato-ketchup type sauce.

No one seems very sure of the mustard sauce’s actual origins—one theory I saw said that it could have been tied to the settlement of a fair few Germans in the area and their love of good mustard. Germans were actually actively recruited to the South Carolina colony in the first part of the 18th century and there’s a relatively strong number today. Some of the biggest names in South Carolina mustard barbecue are of German origin—Bessinger, Sweatman, etc. John T. Edge pointed out that there are also pockets of mustard sauce served in Georgia and Alabama as well.

The main thing here is that the mustard sauce is really good. Really good. Nothin’ fancy—a lot of yellow mustard, a good dose of the Quebec, oak-barrel aged cider vinegar, a touch of sugar, and a bunch of spices (ground coriander, celery seed, fresh garlic, chili pequin, and fresh ground Telicherry black pepper). As you can tell, I like it, and I like being able to teach people about the little ins and outs of food and food history (in case you didn’t notice that about me J So with that in mind, come on out and give it a try. If you’re up for a little bbq adventure check it out.

The S.C. mustard sauce is on the specials list at lunch as a sandwich and on the dinner specials as part of a really nice pork sampler platter. But you can basically order it up anyway you want – South Carolina bbq sandwiches, South Carolina bbq platter for a main meal, South Carolina bbq on some sort of sampler you create for yourself. Plus I have to say that it looks really great on the plate because of the mustard. One way or another give it a try this week and see what you think.

← Previous: East Coast Clams—Rolled, Raw & Steamed Next: In Defense of the Heirloom →