Turning Back the Cocktail Clock a Hundred Years 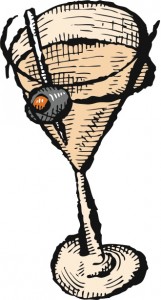 One of the most exciting flavor developments at the Roadhouse has actually come about behind the bar. Just as we have worked to bring back classic, full-flavored traditional American foods, we’re reviving classic American cocktails of earlier eras. This return to old cocktail form is not just some superficial change. It’s not really about style (though it has it in spades), nor is it merely an academic exercise. There’s an enormous difference between the classic cocktails and the “modern” versions that carry the same names, as much as there is between factory and farmhouse cheddar, or the Creamery’s cream cheese and the stuff they sell in the supermarket. And the biggest part of that difference is about flavor—classic cocktails simply taste a whole lot better! Here are the keys to traditional cocktails at the Roadhouse.

Great Ingredients
Just as great meals always start with the best ingredients, so does a truly top-notch cocktail; a mixed drink is only as good as the lowest quality ingredient in it. That’s why we’re working with fresh orange juice (squeezed right behind the bar), fresh lime juice (no pre-made “sour mix”), and making our own version of Maraschino cherries (we still have the industrial ones for kids and those who love them as they’ve been for the last 25 years or so). We bring in exceptional Vermouth from artisan winemaker Andrew Quady out in California, use authentic Cointreau as triple sec, and Bols—the company that invented it—for our Orange Curaçao. We use the best, most authentic spirits possible. For example, Plymouth Original dry gin, made at the oldest working distillery in England (dating to the 1400’s and the inspiration for the naming of Plymouth Rock). Pretty classic stuff on all counts.

Bitters
Bitters are also key to historically authentic and much more flavorful cocktails. If you’re not already familiar with them, bitters fall into the same family as many medieval alcohol-based concoctions, like the Italian Fernet-Branca. From a flavor standpoint, bitters function in a mixed drink much as salt does in cooking; it draws out the flavors of the other ingredients and pulls them together to build the cocktail’s complexity and character. We use three traditional bitters on the bar—Angostura (developed in the 1820’s in Venezuela, now made in Trinidad), Peychaud’s (from early 19th century New Orleans) and Regan’s Orange #5 (redeveloped by writer Gary Regan to revive an old style that had fallen out of production in modern times).

Better Balance
The first thing that surprised me about historically-authentic cocktails was the “discovery” that the original recipes were much more balanced than those generally used today. The point is to blend ingredients in proportions that create a great taste in the glass. And it really works—these classic cocktails, quite simply taste great. Without question, you really can taste the difference!