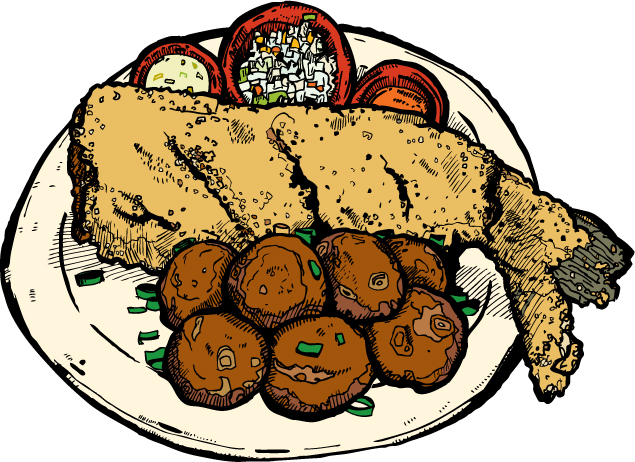 A Toast to Uncle Joe 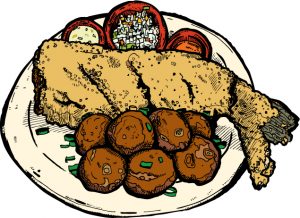 This has been a steady core menu dish at the Roadhouse since we opened. It’s been on my mind this fall for two reasons. First off, I’ve had a steady stream of really positive customer comments about it of late. The second reason it’s on my mind this holiday season is because Uncle Joe Burroughs passed away this summer.

I’m not sure where to start this story so I’ll just begin it with the opening of the Roadhouse in the fall of ’03 since that’s the first time we served catfish here at Zingerman’s. It’s a classic American dish so it makes sense that we’d put it on the menu and it was pretty popular right off the bat. That said, we knew too that it could be better, so I started asking around about it.

Although I knew her only from her “modern” life in Boulder and from traveling together in Europe, Peggy Markel actually grew up in Alabama. (Unrelated—or at least not directly related—to catfish, she runs a cooking school in Tuscany and food tours in Italy and Morocco. See her website for more on her work—www.peggymarkel.com). And, it turned out that her Dad, Joe Burroughs, has cooked catfish almost every Friday night in the small town of Albertville where Peggy grew up.

“He always wanted his own fried catfish joint. He was famous,” Peggy told me five years ago. “People came from far and wide to our house for some of ‘Uncle Joe’s famous catfish.’ It was a hot ticket. My dad had a barbecue pit in the back yard that he rigged a gas line to. He would heat a deep, oblong cast iron skillet full of Mazola oil. Soon after, those delectable fillets lightly dusted with corn meal from being shaken in a paper sack would be sprinkled with the ‘secret ingredient’, and expertly slipped into the simmering hot oil. We never had enough money to realize his Catfish Café, but we had one anyway, every Friday night at our house with people going crazy over crispy fried catfish, hushlittlepuppydogs (aka, hush puppies), slaw and hot pickled jalapeno peppers that my dad grew and pickled himself from 12 different varieties. This all went down easy with a few beers (home-brewed by my uncle Charlie) from one of the outdoor fridge’s behind the barbecue pit.”

The ‘secret ingredient’ is garlic salt—not something that I use much of in my cooking these days. But, if Peggy’s dad was doing great catfish with that much success for so long it seemed sort of silly not to try it. And, lo and behold, Alex and I tested it and it really does liven up the flavor of the fish. And in honor of Joe, my friendship with Peggy, and his long-standing if unfulfilled desire to open his own restaurant, we named the dish on the menu after him.

As I said, above, Uncle Joe passed away this past summer. While I’m saddened for Peggy and her family, Joe lived a good life. To quote from Peggy’s nice eulogy: “‘Gone are the days when my heart was young and gay, gone are the years of the cotton fields away, gone from this earth to a better place I know, I hear the gentle voices calling…old..black…joe…I’m a comin, I’m a comin for my heart is young and gay..I hear the gentle voices calling…old..black…joe……..’

“This was a song our daddy used to sing to us at bedtime. When I got old enough to understand the words, I registered then and there how sad I would be when that time came around. Life without daddy Joe would be real sad. That time came Saturday, July the 12th, 2008, when at 90 he took his last breath. It is as sad as I always imagined it to be. But I feel better about it than I ever thought I would. To reach 90 having had a good life, no sickness and die in one’s sleep from old age and no regrets is cause for celebration.”

Shifting back from sadness to sunny memories of fish fries, she went on, “I can still remember how proud I was as a kid to learn how to take my fork and go up the spine of a freshly fried fish, still steaming, fillet it and dab it into some homemade ‘goush’: an equal mix of catsup and mayonnaise. It was so good, my sisters and I would turn on Elvis Presley and ‘do the mash potato.’ It became a regular theme.”

I’m sad that I never got down to Albertville to meet Uncle Joe in person. Peggy’s tales will have to suffice. That and the taste of this not particularly fancy, but nevertheless darned good fried whole catfish. If you’re into fish, give it a shot next time you’re in, and make a toast to Uncle Joe. I do every time one of great looking hush puppy and cole slaw laden catfish platters goes out to a table.

← Previous: Biscuits and Chocolate (with Bacon) Gravy Next: Mac & Cheese Making a Comeback? →