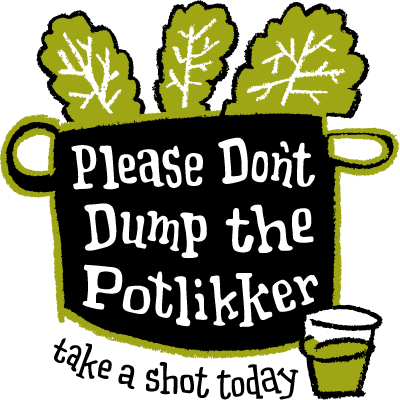 This one’s on the menu at the Roadhouse so, although I’ve been making it at home, you could actually just go in there and order it for dinner as well. Either way, the dish starts with potlikker—the broth from the long cooking of greens (collards or whatever you’re using) with bacon. I buy mine from the Roadhouse but you can easily make your own by doing some long simmering at home. Take the greens out and serve them for dinner—save the potlikker for whatever you like. In the moment, we’ll say for this very fine fish stew. Making the potlikker is actually the hardest part of this process (and it’s not all that hard). The rest is about as easy a dish as you’re going to get. Simmer it up and then add some fresh fish of your choosing—really almost anything at Monahan’s will work well. Simmer until the fish is flaking. Add salt and pepper to the soup to taste. And, really, that’s it!

At the Roadhouse we serve it over Anson Mills grits which are amazing on their own and excellent under the potlikker and fish. At home I do a slightly different version which skips the grits and calls for cooking some really wild, wild rice in the potlikker before you put the fish in. The quality and source of the wild rice is essential; it has to be the real thing—hand-harvested by Native Americans the old fashioned way from lakes and rivers where it truly grows wild—NOT the stuff sold in most stores, which is cultivated, NOT wild and NOT very good. At one point that really wild, wild rice would have likely come from close by, but these days human intervention into the ecosystems has resulted in the rice growing areas receding quite a bit—northern Minnesota is now by far and away the most significant source, though there are also small amounts gathered in the wild in Wisconsin and Michigan and still in good quantities up in Canada.
In terms of the soup, either use some of the already long cooked greens you used to get this going, or add some fresh greens, coarsely chopped, to the pot. If you’re into the bacon bit of it, add another big chunk. The really wild, wild rice will take only about 15-20 minutes (that’s the correct time—the cultivated stuff will take three to four times as long). When the rice is done add the fish and simmer ‘til it’s done. Eat it as is or fry up a couple slices of Roadhouse bread in bacon fat ‘til they’re golden brown, place them at the bottom of the bowl and then ladle the stew over the top. Makes me hungry just writing about it!!