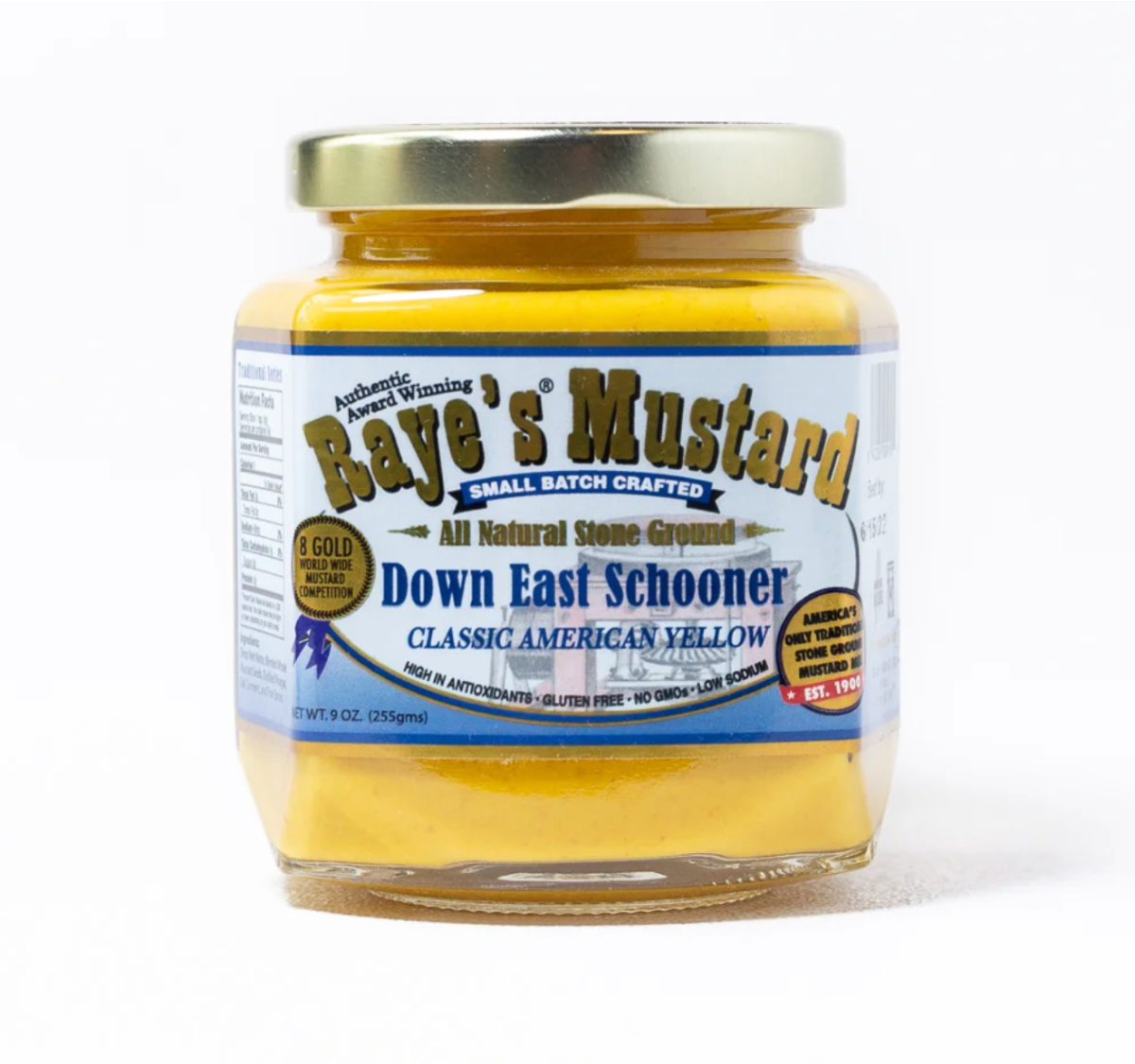 The primary color of mustard makes its mark in Ann Arbor

Given all of the really great goings on in the food world, something as seemingly simple as yellow mustard would be easy to miss. However, given that here at Zingerman’s we work hard not to miss too much that has to do with food, and given that we serve as many corned beef and pastrami sandwiches as we do, not to mention all those ground-fresh-daily, hand-pattied burgers we grill up at the Roadhouse, we don’t take yellow mustard for granted. Which is why we’re so devoted to what we get from Raye’s.

Located in the tiny town of Eastport, Maine—almost as far north up the coast as one could go without actually crossing the border into Canada—Raye’s is the only traditional stone mustard mill left in the U.S. The mill was built back at the turn of the previous century by Karen Raye’s husband’s great-great uncle, J.W. “If he were here today,” Karen told me, “J.W. would see the mill pretty much as it was working when he built it. We’re still using the original stones,” she said, referring to the eight, 2000-pound, quartz wheels that were quarried, carved, and carted over from France in 1900. The milling and mixing started up back then in great part to provide mustard for Maine’s booming sardine industry (check out the handmade chapbook I did about them, Sardines!), right at about the same in the first few years after the turn of the 20th century that the Disderide’s built the Deli’s building. The sardine trade in Maine is no more, but the mustard milling is happily still going strong.

The Rayes’ work, and their mustard, is all about dignity, and the results are delicious. They treat the mustard seed, the milling, their community and their customers with grace. As they share:

While most modern mustards are either cooked or ground by high-speed technology, only Raye’s maintains the traditional cold grind process using the original stones from France and made in the same mill since 1900. No one else can make that claim. The cold grind process preserves the volatile taste qualities of the whole seeds.

How the mustard is made.

The mustard-making process at Raye’s starts with whole mustard seed. By contrast, most other commercial products these days start with already-processed mustard powder. The Raye’s work is all based on cold-stone milling of that mustard seed. As the seed passes through each of the four sets of stones, the resulting paste gets ever creamier, which explains why the finished product you and I get out of the Raye’s jar is so smooth. To protect the cold-milled seed, the Rayes use cold water from their 400-foot well—same idea as mixing the bread dough out at the Bakehouse. Cooler water takes longer, but protects the flavor of the seed. (Most commercial producers today use heat in the production process to speed production and increase yields.) The mustard is then allowed to age for a few weeks before it gets packed up. It’s won multiple awards at the Napa Valley World-Wide Mustard Competition as the “World’s Best Classic Yellow Mustard.”

How we enjoy Raye’s mustard at ZIngerman’s.

The Raye’s mustard really is darned creamy, with a mellow but mouth-filling flavor. Try Raye’s yellow mustard on a sandwich at the Deli, on a burger at the Roadhouse, or add it to a grilled cheese. It’s also in the South Carolina Mustard BBQ sauce at the Roadhouse. Put it in potato salads, egg salads, sandwiches, or sauces. It’s great with hard cheese, salami, or fresh salmon. And, in the spirit of its historical origins, put some great sardines on a plate, and spoon on a bit of the Raye’s. With a few crackers or a slice of toasted Rye bread from the Bakehouse, you’ll have a world class lunch that comes together in under two minutes!