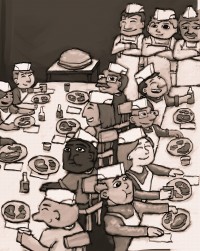 Beginning in the 1860’s, butchers would sneak choice cuts of meat into the kitchens of nearby saloons, grill them over coals, and feast on them during Saturday nights-on-the-town. This New York City tradition became known as a “Beefsteak” – a simple, masculine feast of beef, lamb chops, kidneys and beer – with simple etiquette rules: knives, forks, napkins, tablecloths – even plates – were entirely optional. The Beefsteak became to New York, what a barbecue is to the South, or crab feast is to Maryland; a place to gather a community, often around a political cause or fundraiser.

This dinner is SOLD OUT!