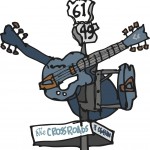 One of the most famous Delta blues musicians, Robert Johnson influenced many musicians for generations with his voice, songs and amazing guitar skills. Together with the University Musical Society, we will be celebrating the man who, as legend tells it, gave up his soul at the Mississippi junction of Highways 61 & 49, to write the baddest blues the world had ever heard. Bruce Conforth, the first curator of the Rock and Roll Hall of Fame and U of M American Culture Professor, will share his stories and knowledge on Robert Johnson and his early influence on jazz while Chef Alex shares the story of Mississippi and blues through an amazing Mississippi meal. Robert Johnson Centennial Project Menu

Buy tickets to the Thursday, February 10th concert at www.ums.org